The coach will stay at the club for two more seasons, where he has won 2 Euroleagues, 1 Intercontinental Cup, 5 Leagues, 6 Copa del Rey and 6 Supercups.
Pablo Laso will continue at the helm of Real Madrid basketball team for two more campaigns. During his ten seasons in charge, Laso has won 20 titles: 2 Euroleague titles, 1 Intercontinental Cup, 5 Leagues, 6 Copa del Rey and 6 Supercups. In this time, he has also become the Real Madrid coach to have coached the most games in the club's history (774) recording the most wins (596), in both cases overtaking another legend, Lolo Sainz.

Laso is defining an era in the basketball section and has been the mastermind behind one of the team's most successful periods. Ever since his arrival at the helm of the team in the 2011-12 season, he has taken Real Madrid back to the top, winning every possible title, including the historic 2014-15 trophy haul. His honours also includes two Euroleague coach of the year trophies (2015 and 2018) and five AEEB coach of the year trophies (2013, 2014, 2015, 2018 and 2021). 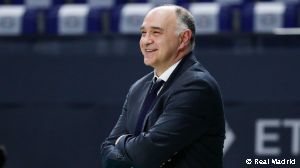 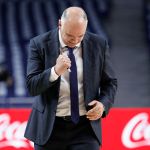