The team that finished top during the Regular Season will be out to build on a devastating start to the play-off campaign. The Whites won the first match-up of the series by a 24-point margin (103-79) to record the second-highest points tally of the season in the process. That victory also featured a historic first quarter as the team posted a record points margin in a single quarter of a playoff game (+23). Tonight is Madrid's first chance to claim victory in the series. However, the Whites' coach already warned after the opening game that this contest would be a completely different prospect. Herbalife Gran Canaria is playing to remain in the competition and will be looking to bounce back following Monday's defeat. Porfirio Fisac's men are one of the league's most in-form sides after having enjoyed a fine end to the Regular Season.

The madridistas' game plan has to be to reproduce the performance seen at the WiZink Center, where they performed to a very high standard, particularly in offense. In the quest to claim victory, containing the hosts' three offensive stars (Albicy, AC Slaughter and Costello) and dominating on rebounds will be key. The Tavares, Poirier and Tyus trident were an insurmountable barrier for Herbalife Gran Canaria in the paint. The Frenchman posted a second consecutive double-double (14 points and 11 rebounds) and his highest PIR (26), whilst the North American was unstoppable in the offensive rebound stakes (seven).

Madrid look to build on record
Madrid emerged victorious from the Gran Canaria Arena in its road trip on Matchweek 4 of the Regular Season (65-90) and has amassed 10 straight wins since Laso took up the reins. Seven seasons ago, in the previous quarter-final meeting betwen the teams, Real Madrid took the series following a 2-0 triumph. 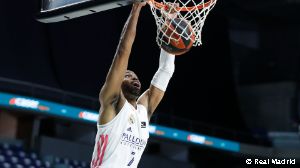