Laso's men will be hoping to become the first team to have won every single away game in a Regular Season (6:30pm CEST).
With first place in the Regular Season tied up, Real Madrid have one final pending challenge: becoming the first team in the competition's history to remain unbeaten away from home for the entire campaign. They have won 17 in a row on the road and this evening at the Martín Carpena the team could achieve an unprecedented feat. It won't be an easy task. Their opposition, Unicaja, sit eighth in the table and need a win to be guaranteed a play-off place.

The league leaders face a tough trip to Málaga. It's always the same, even if this time they've got the job done already, having beaten Bilbao Basket at the WiZink Center four days ago to clinch home-court advantage in the play-offs. The same can't be said for the Malagan team, who are playing against Gran Canaria and Andorra for the last quarter-final spot. The madridistas' first-round play-off clash will come against one of these three teams. The Andalusian team have their fate in their own hands.

Madrid have won the last three meetings between the two teams. Most recently was a 91-84 win at the WiZink Center on matchday 14. Five madridistas finished with double figures for points, led by Tavares. Laso kept him out on Thursday and could do the same again this evening with the play-off on the horizon. If he's not available, Poirier is a more than able substitute. The Frenchman is getting better with every passing game and enjoyed his best performance to date against Bilbao Basket (10 points, 13 rebounds and 20 PIR).

Unicaja is a team to be competing at the top. They boast quality players in every position: Jaime Fernández, Brizuela, Alonso, Waczynski and Bouteille on the outside and Thompson, Abromaitis, Guerrero or the new face, Thomas, on the inside (Suárez, Nzosa and Mekel miss out).

Untouchable on the road
Seventeen away games, 17 wins. They've already set the record, but a win today would see the madridistas complete an unprecedented feat, bettering their 16-1 record from 2013-14 and the 14-0 in 1984-85 (in a different format). But Real Madrid could also clinch the best ever Regular Season campaign. If they beat Unicaja, they'd finish with 34-2, a 94.4% win rate, eclipsing the 94.1% from 8 seasons ago (32-2). Time to put the icing on the cake of a remarkable Regular Season. 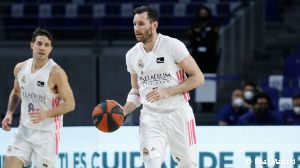