Tavares made it 100 appearances for Real Madrid in the European competition. Since he joined the madridistas in the 2017-18 season, the center has progressively become one of the most dominant inside players on the old continent. In the present season, Tavares has been playing his best basketball at Real Madrid, with scoring averages of 10 points, almost 6 rebounds and 1 block for 14.1 PIR per game. 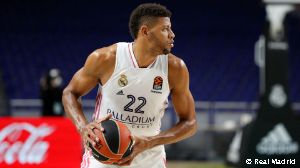