The fans enjoyed the last training session of 2018, which took place at the Di Stéfano.
A special year deserved the perfect climax. The Alfredo Di Stéfano stadium experienced a great celebration of madridismo with open-door training for members and season ticket holders. Real Madrid, who bring to an end a year in which they defended the European and Club World Cup titles, trained in the presence of thousands of fans, who filed the stands to share the session their idols. La Decimotercera and the Club World Cup looked on from the side line.

An hour and a half before the session began, the fans began to arrive at the Di Stéfano. Full of families and lots of children who attended to see the team up close. "We’ve come this morning from Badajoz because it’s a great opportunity. This year we have again been crowned champions of Europe and the world and we’ll never forget that", said one of the first to arrive at the stadium.

The most exciting moment came a few minutes after 11am with the start of the session. One by one, all the squad were welcomed on to the pitch to load cheers. "Being able to see to the best in the world so close up is unique", said one fan who, like the whole crowd, did not stop cheering on the team. At the end of the session, the players returned the show of affection by giving away balls and signing autographs. The team and fans bring to an end another year to remember. 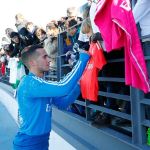