Real Madrid won four titles for the first time in their 115-year history.
The current crop of madridismo can now claim to have experienced the greatest season in its history. The 2016/17 campaign has come to a close with no less than four titles, a feat never previously achieved by the club. This triumphant season began in August with a win over Sevilla in the European Super Cup. It was the third in the Whites' trophy cabinet, claimed in Trondheim (Norway) following another epic clash with goals from Asensio, Ramos and Carvajal.

The Club World Cup was the next title to fall. The Whites won the tournament disputed in Japan, beating Kashima Antlers in the final. Just as in the European Super Cup, the match was decided in extra-time. Cristiano Ronaldo, with a hat-trick, and Benzema got the goals on this occasion.

The consistency of Zidane's side throughout the year was eventually rewarded with Real Madrid's 33rd LaLiga title. They were made to sweat until the final game at La Rosaleda to be crowned champions, finishing three points ahead of Barcelona. What's more, the madridistas ended the season having scored in every single game for the first time in their history.

The wonderful campaign came to an end in the best possible fashion in Cardiff. A 1-4 win over Juventus added to Real Madrid's legendary status in the European Cup, with the Duodécima. Cristiano netted a double, with Casemiro and Asensio also joining him on the score-sheet. The parade to Cibeles, followed by the party at the Bernabéu were a fitting end to a historic season. 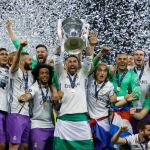