The Whites face the rearranged LaLiga fixture, which was rescheduled on account of the Club World Cup, at Mestalla.
Real Madrid have now arrived in Valencia ahead of Wednesday's Matchday 16 encounter (6:45pm CET), which was rescheuled on account of the Club World Cup. Following a flight of just under an hour, Zinedine Zidane's charges were welcomed by a large number of supporters upon their arrival at Valencia Manises airport. The madridistas repaid the supporters for their welcome by signing autographs. The expedition then made its way to the Palau de la Mar hotel, where the team were greeted by more supporters. The Whites will remain at the hotel until shortly before the Mestalla clash. 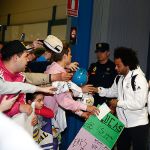