1
On the big occasions, in the dying minutes, Sergio Ramos always steps up to the plate. The name of the Real Madrid captain shall forever be associated with the period between the 90th minute and until the referee blows the final whistle. Real Madrid didn't deserve to lose this evenly matched Clásico and they didn't thanks to his towering headed effort in the last minute. The Whites have now gone 33 games unbeaten and maintain the gap with Barcelona to six points, while they have a seven-point cushion over Sevilla.

The first half belonged to the Whites as it was played at an incredible pace, though few real chances were created. The best opportunities fell the way of the madridistas, particularly in the final stages. In the 3rd minute, the referee refused to blow for a penalty as Mascherano upended Lucas Vázquez in the area. A very solid-looking Real Madrid controlled the centre of the park with Modric, Kovacic and Isco all faultless, preventing Barcelona from posing any real threat on the madridista area.

Visiting chances
The league leaders, however, upped the pressure in the final moments of the half, and had a chance to score with 37 on the clock, but Cristiano Ronaldo's left-footed strike was pushed behind for a corner by Ter Stegen following a moment of individual quality. The same players linked up just one minute later as a long ball from Luka Modric found Lucas Vázquez, who combined with the Portuguese man, taking two touches to bewitch the Barcelona defence, including a nutmeg on Mascherano for good measure, but he could only find the hosts' goalkeeper with his shot.

The Whites' threat didn't end there though, and in the 44th minute they had a double opportunity. Benzema swung in a dangerous cross and Piqué, at full stretch, sent the ball out for a corner. Isco took the kick and Varane's header ended up in the arms of Ter Stegen.

The second half couldn't have got off to a worse start. Neymar took a free-kick in the 53rd minute and Luis Suárez scored with a header. Real Madrid needed to launch a comeback at the Camp Nou. They found themselves with more and more possession, however, in the 68th minute Neymar had the chance to increase the deficit, but he sent his effort high over the bar.

The home side’s goal gave them a real boost, and they found themselves getting in and around the opposition box with increasing frequency. The minutes went by and Real Madrid started gaining ground. Messi had the chance to capitalise in the 82nd, but when faced with Keylor Navas in a one-on-one, he skewed his effort wide of the upright.

Ramos rears his head again
In the dying minutes, Real Madrid boxed their opponents in and got a well-deserved goal. The stars of the show were the same as those in Lisbon, on the night of La  Décima. Modric took the free-kick and Sergio Ramos scored with a thumping header. In added time, Casemiro cleared a headed effort from Sergi Roberto on the goal line. Real Madrid claimed an important point at the Camp Nou and now turn their attentions to the final group game in the Champions League against Borussia Dortmund. 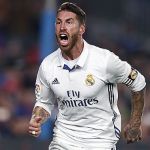