The Whites won the league title for the second successive season.

Real Madrid claimed their 33rd League crown after running out 3-1 winners over Barcelona in their playoff final series. This triumph sees the Whites remain the most decorated club in the history of Spanish basketball (both in the National League and ACB eras) and retain last year's crown. This season also saw the madridistas claim another double after lifting the Copa del Rey title in February for the third year in a row.

En route to victory, Real Madrid overcame UCAM Murcia (2-1) in the quarter-finals and Valencia Basket (3-1) in the semi-finals. Pablo Laso's men, who slipped to defeat in the last second of the first game of the final series, recovered from this blow to regain home-court advantage with a convincing win at the Palau. On the back of this, they emerged victorious in front of their fans in the third (91-74) and fourth games (91-84) to lift yet another title.

Sergio Llull was named the Endesa League final's most valuable player after posting 19 points, 6.5 assists and a PIR of 22 in the four clashes against Barcelona. The point/shooting guard claimed his second MVP award after also having picked up the accolade in last season's final. This latest MVP award sees Llull draw himself level with Felipe Reyes and become the second player to claim two straight MVP awards after Sabonis achieved the feat in days gone back.

The Mahón-born player put in some dazzling performances, just as the whole roster did. Real Madrid performed excellently throughout a playoff campaign in which they posted an average of 91.4 points per game. The 54 points they made in the first half of the third game against Barcelona represents the Whites' best points return in a playoff final, whilst in the second matchup they claimed their biggest win at the Palau in the ACB era. Furthermore, Reyes become the player to post the highest PIR in the League playoffs.

Real Madrid toasted their second successive title triumph on the Palacio court after achieving the feat for the first time in 22 years and claiming the team's second straight double in 30 years. The joy produced by this triumph continued on into the locker room, where Florentino Pérez congratulated the champions, in the post-match reaction from the players and in the celebratory meal held between the roster and the coaching staff. The following day, the team headed to the City Hall and the Community of Madrid offices for the second time this season to parade a league crown which sees Real Madrid add to their honours list. 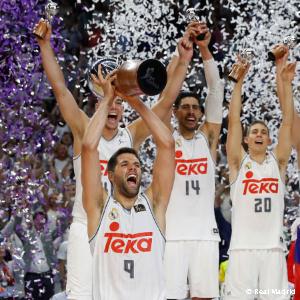 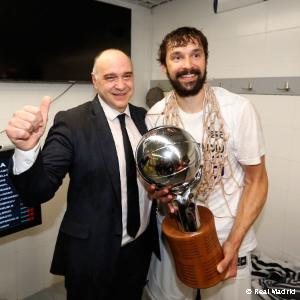 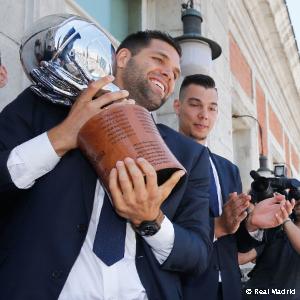