The Madrid expedition, who were greeted by roughly one hundred fans, made their way to the Golden Palace hotel, where they will rest until the beginning of the match. On their arrival to the hotel, they were met by a further 200 Real Madrid supporters. 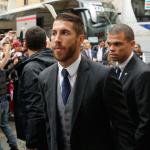