Cristiano Ronaldo scored the Whites' goal after a spectacular move that saw an outstanding backheeled assist from Benzema.
Camp Nou

2
1
Real Madrid deserved more in a vibrant, evenly-matched El Clásico, in which the Whites' task was complicated early on. Despite going close to scoring after 12 minutes through a deft far-post volley from Cristiano Ronaldo that hit the bar, it was Barcelona who took the lead with their first attempt on goal, Messi delivering the free-kick on 19' and Mathieu heading past Casillas. Madrid would have to produce a turnaround, but the European champions had already shown on innumerable occasions that they have it in them to do so at any ground.

The goal spurred Real Madrid into action, the visitors creating several chances to level up a match in which they were undeservedly behind. And they hit the equaliser on the half-hour mark, courtesy of a spectacular counter. The attack was launched by Casillas and culminated by Cristiano's poked finish. However, the move's moment of brilliance came in the assist provided by Benzema, the Frenchman seeing the Portuguese star's run and feeding him with a backheel.

Madrid superiority
From then until the break it was all the away side, who enjoyed a number of opportunities to go in for half-time ahead. Indeed, the Whites had the ball in the back of the net on 40', but Bale's effort was ruled out for offside against Cristiano when he headed the ball on. The Welshman then had the clearest chance after 43', but his right-foot shot from around the penalty spot flew centimetres wide of Bravo's goal.

Chance for Benzema
The start of the second half underlined that Real Madrid were proving the better side, and only a lack of cutting edge in front of goal was between them and the lead. This was again the case in another neat move after 49 minutes, in which Benzema could not beat Bravo when one on one. With Madrid unable to get their second, Barcelona's arrived. Alves's long ball after 56' saw Luis Suárez score with an angled shot that beat Casillas.

Fortune, which was eluding Madrid, was again on their opponents' side. The goal left Barcelona with their tails up, but there was still time and Real Madrid were going to give it their all until the very end. Benzema provided an illustration of this on 79' with a drive that took a venemous deflection off Piqué and forced Bravo into a tremendous save. The Whites deserved more. 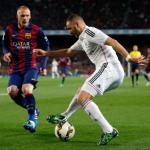