Real Madrid enjoyed a sensation European Cup campaign including some memorable matches at the Bernabéu.

Ancelotti’s men defeated Liverpool (0-1) in the final played in Paris.

On 28 May 2022, Real Madrid were once again crowned Kings of Europe when they further enhanced their legendary status in the Continent’s top competition by clinching their fourteenth European Cup. The final was contested at the Stade de France, also the scene for the Octava, and in Paris, the city where the Whites secured the first ever edition’s trophy in 1956. A goal by Vini Jr. in the second half and a string of fine saves by Courtois decided the clash against Liverpool. The Belgian goalkeeper was voted Player of the Match for the final.

On the road to winning the 2021/22 Champions League, Real Madrid went on a sensational run in the knockout stages.  Beforehand, the team had finished the group stages in first place ahead of Inter Milan, Sheriff and Shakhtar Donetsk.

An incredible journey
In the last-16, the madridistas had to face PSG and, after slipping to defeat in the first leg in Paris, they produced a wonderful comeback at the Bernabéu courtesy of a hat-trick from Karim Benzema. This was the first magical night at our stadium in this season’s competition, and there would next be a repeat of this in the quarter-finals against Chelsea. Real Madrid fought back superbly when Rodrygo scored in the 80th minute to send the clash into extra-time, where Benzema secured the team’s place in the next round. The semi-final against Manchester City also saw Madrid produce the kind of display that dreams are made of. After losing the first leg 4-3, and just when everything seemed lost in the second leg with the Whites losing 0-1 in the 89th minute, the Bernabéu witnessed another legendary moment when Rodrygo bagged a brace in the space of two minutes. In extra-time, Benzema converted from the penalty spot the secure the side’s spot in the final and the chance to clinch the Decimocuarta.

The French striker enjoyed a spectacular season in which he struck 44 goals. He also performed excellently in the Champions League, finishing as the top scorer in this edition with 15 goals, the best player and the author of the best goal. In the individual awards, Vini Jr. also excelled, being named best young player. Both Madrid players made the Champions League team of the year, along with Courtois and Modrić.

La Decimocuarta added more gloss to Ancelotti’s already impressive C.V., as the Italian became the first coach to win the European Cup on four occasions. Two of these triumphs were with AC Milan (2003 and 2007) and the other two with Real Madrid (2014 and 2022). “Ancelotti’s right when he says that he believes that the biggest difference between Real Madrid and other clubs is that as well as being good professionals, the players are true madridistas”, said Florentino Pérez after the final at the Stade de France. Another figure to write history was Marcelo, when he made it 25 trophies with Real Madrid, a club record, after lifting the Decimocuarta.

The day after the success in Paris, the squad visited the headquarters of the Comunidad de Madrid, the City Hall and the Almudena Cathedral to display the trophy to the madridistas. They then shared unforgettable moments with the fans at Cibeles and in the party at the Santiago Bernabéu. This brought the curtain down on the 2021/22 season that saw the club secure three trophies and a permanent place of honour in the history of the greatest club in the world. 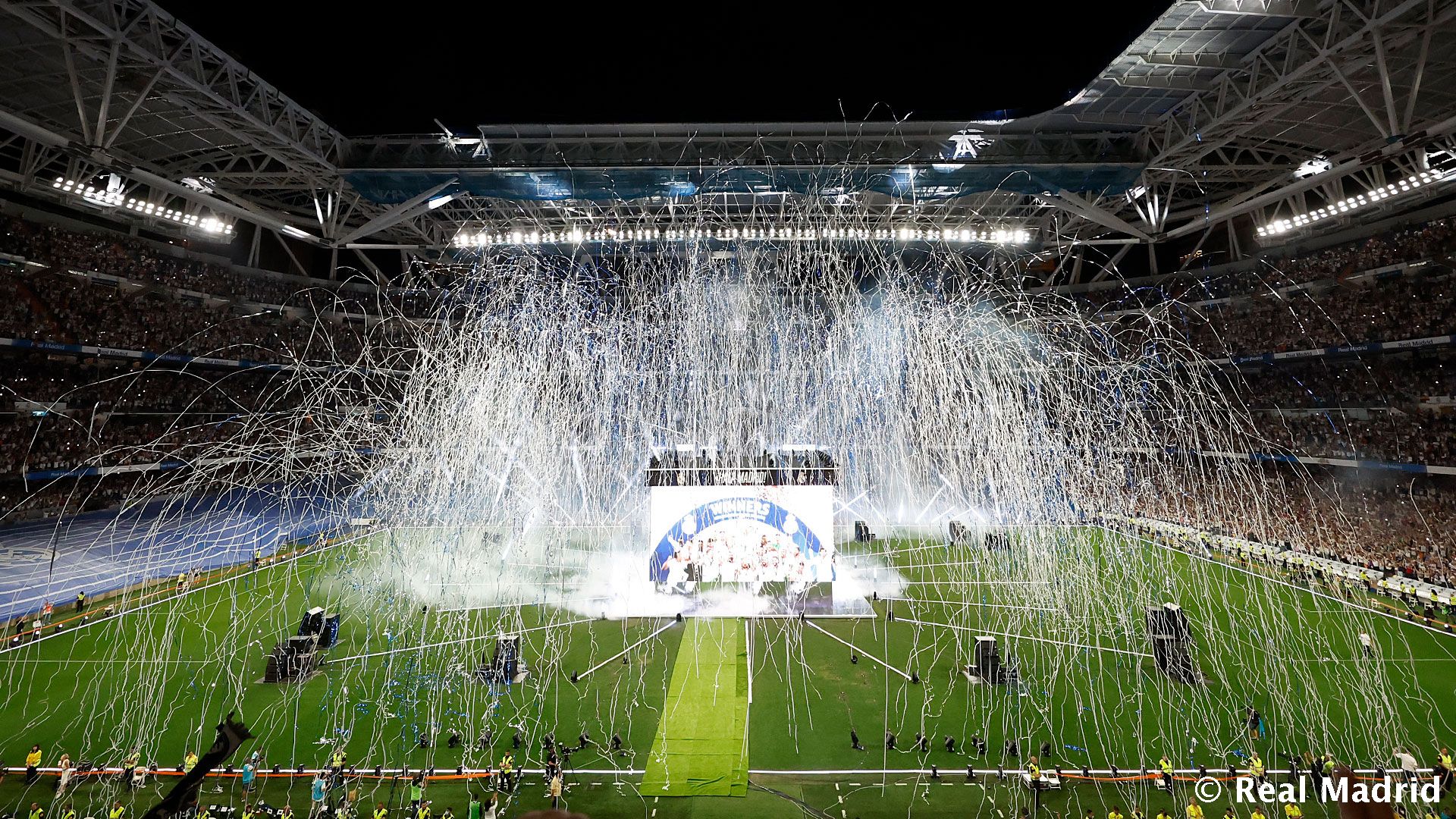 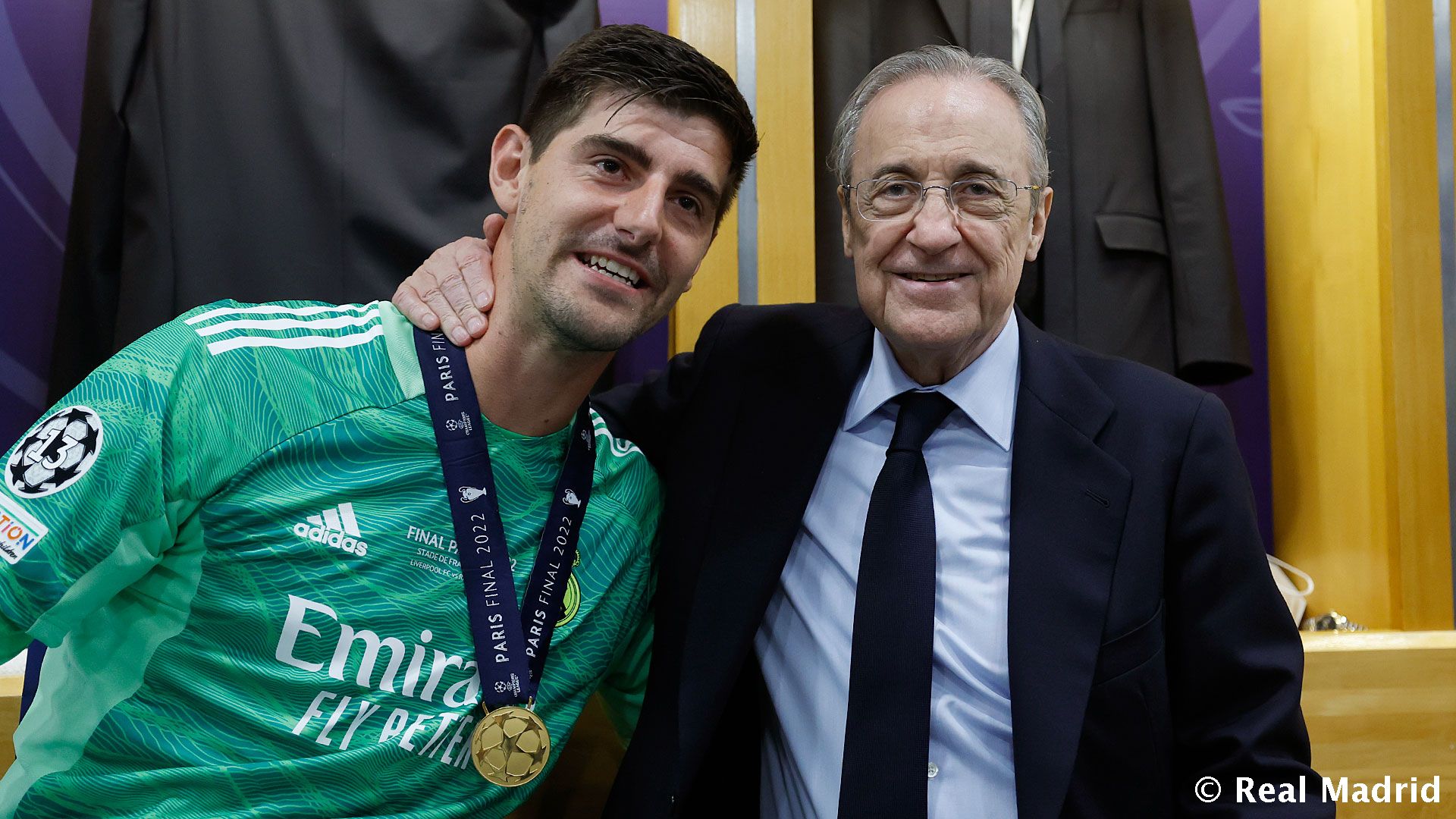 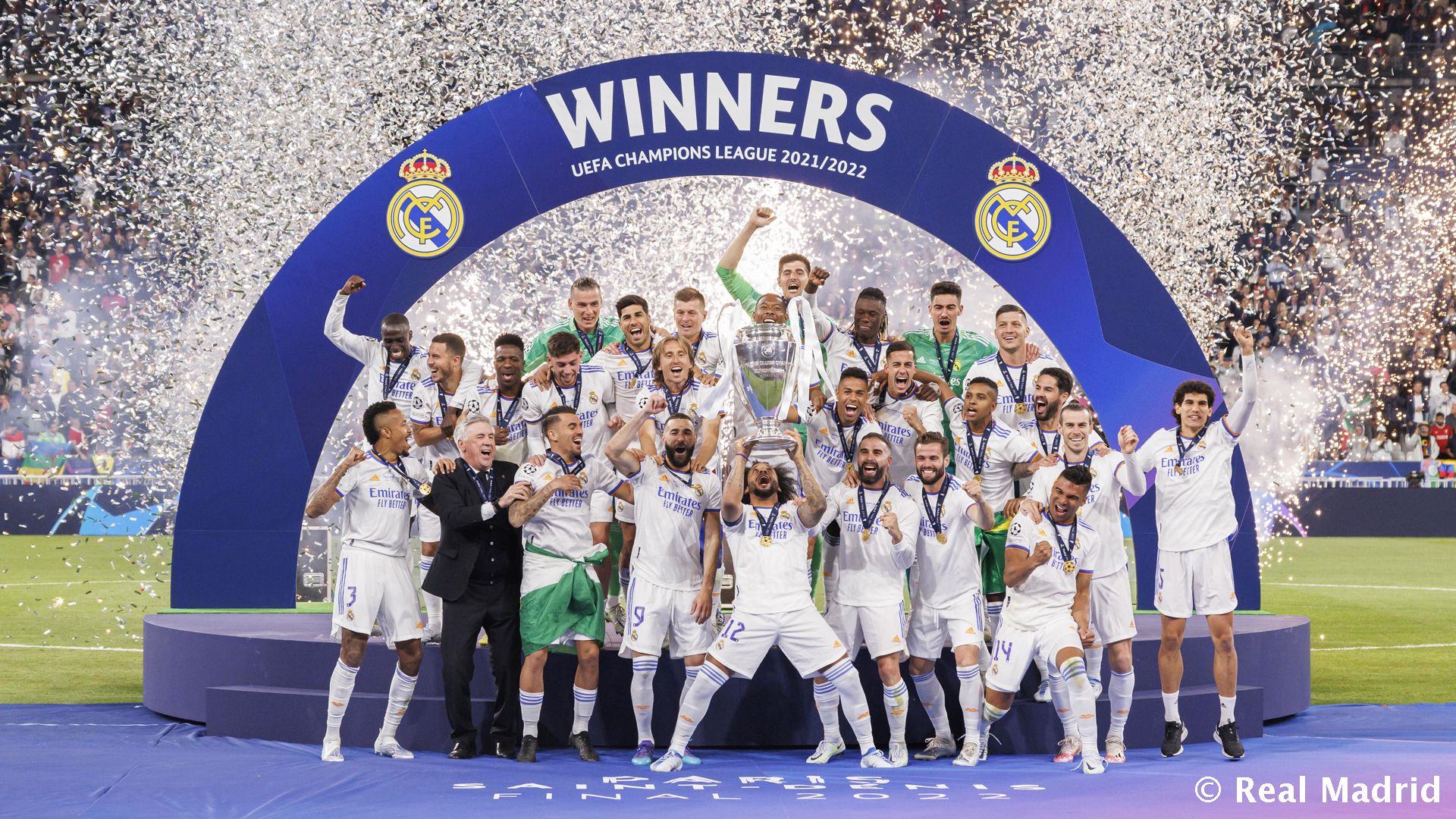 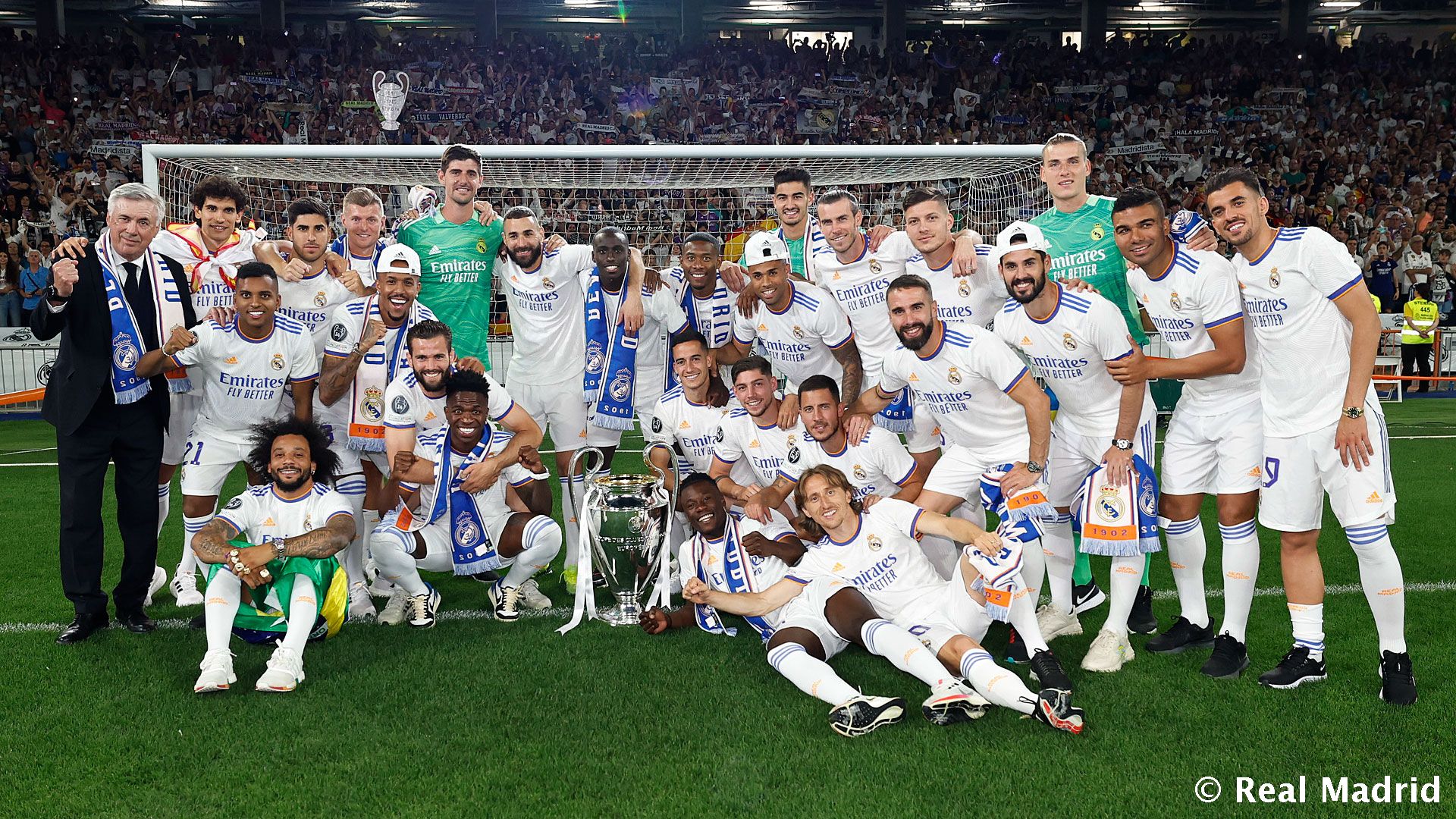 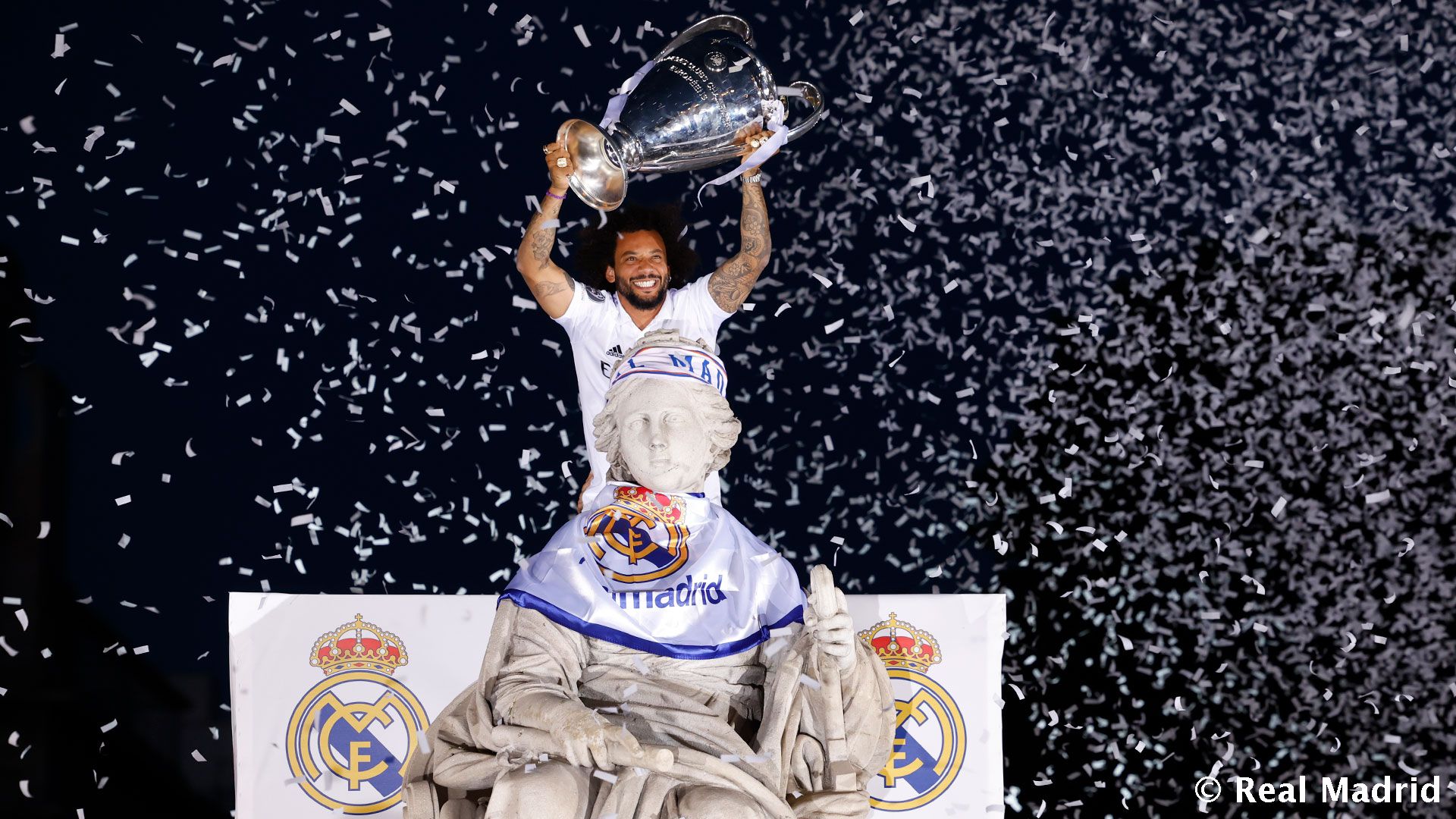