He was president of our club from 1995 to 2000 and won 7 titles, among them the Seventh and the Eighth European Cup.
Our much loved president Lorenzo Sanz received an emotional tribute as football returned to the Santiago Bernabéu. Prior to the match against Celta, Real Madrid paid tribute to the figure of the man who presided over our club from 1995 to 2000 and who passed away on 21 March 2020. In his time at the helm of Real Madrid, the cub won 2 European Cups, 1 Intercontinental Cup, 1 Spanish League, 1 Spanish Super Cup, 1 Spanish Basketball League and 1 European Basketball Cup Winners' Cup.

A large banner with Lorenzo Sanz's picture was placeed in the centre of the pitch, where several Real Madrid legends displayed the trophies won by the club during his tenure. Mijatovic and Sanchís carried the 7th European Cup; Michel Salgado and Casillas, the 8th European Cup; Fernando Sanz and Morientes, the 2nd Intercontinental Cup; Hierro and Guti, the 27th Spanish League; Chendo and Amavisca, the 5th Spanish Super Cup; Arlauckas and Antúnez, the 4th European Basketball Cup Winners' Cup; and Lorenzo Sanz Durán and Alberto Angulo, the 28th Spanish Basketball League.

Lorenzo Sanz's wife, Mª Luz Durán, his children Lorenzo, Paco, Fernando, Malula and Diana, and the rest of the family expressed their gratitude from the centre of the pitch for all the messages of affection and support received. 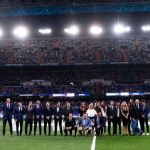