The madridista center has won the Rising Star Trophy, a prize handed to the competition's best player under 22 years old.
Usman Garuba has been chosen by the Euroleague teams' coaches as the best young player in the competition (under 22 years of age) and winner of the Rising Star Award 2020-21. The center, who was the highest-rated player with 238 points, got the better of Jokubaitis (Zalgiris, 212), his teammate Alocén (93), Mattiseck (Alba Berlin, 66) and Bolmaro (Barça, 65). The madridista, who was also recently voted the best young player in the Endesa League, has grown in importance to the team this season, reflected by the fact he's been involved in every single game. At just 19 years old, Garuba has put in some outstanding performances, including 15 points and a PIR of 25 in the win over Alba Berlin in the Regular Season.

When he really solidified his status though, was in the play-off against Anadolu Efes, particularly in the two wins at the WiZink Center, taking 10 points and 9 rebounds in the third game, before posting 24, 12 and PIR of 30 in the fourth. The latter was the best performance of any player of his age in the competition's history. Garuba follows Bitazde (Buducnost) in lifting the trophy and is the fourth madridista to win it after Mirotic (2011 and 2012), Rudy when he played for Joventut (2007) and Doncic (2017 and 2018). 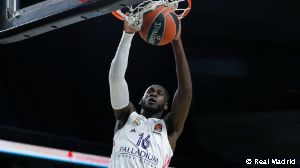