Zidane's men head to Anfield looking to make the most of the 3-1 first-leg win (9pm CET).
A place in the Champions League semi-finals is on the line tonight at Anfield (9pm CET). It's a case of all or nothing on a night when Zinedine Zidane's troops will be looking to take advantage of the 3-1 first-leg triumph and extend a fine run of form which saw the team win last Saturday's El Clásico and stretch the unbeaten run to 13 games (W11, D2).

It certainly won't be easy. Indeed, they don't come much tougher as Real Madrid prepare to take on one of the candidates to lift the trophy and the 2019 winners. The English side's record on home turf in his season's Champions League proves just what a stern test lies in store. Liverpool have conceded just two goals, both of which came in their only defeat, the 2-0 reverse against Atalanta. The team's other three matches, which saw them keep a trio of clean sheets, all ended in victory, with the Reds overcoming Midtjylland (2-0), Ajax (1-0) and Leipzig (2-0)

However, as the team showed in the first leg, Real Madrid produce their best in such games. "We've got to go out to win and not try to defend out lead", declared Luka Modrić. Meanwhile, Zidane confirmed his confidence in a side that has found the net in each of its last 17 outings: “We need to put in another big performance to progress”. The Whites' coach has named a 21-man squad for the tie. Amongst those named in the squad is Karim Benzema, whose recent form is well worth highlighting. The Frenchman heads into the game after having been on target in eight of his last nine games, which have yielded 10 goals.

Liverpool
The English outfit not only boast one of the competition's meanest defences (the hosts had conceded just three times prior to the quarter-finals), they also have a wealth of attacking talents who are capable of turning the tie in their favour. The trident made up of Salah (six), Diogo Jota (four) and Mané (three) have scored 13 of the team's 15 goals in this seson's Champions League. This promises to be a thrilling encounter between two sides who have 19 European Cups to their name (our 13 trophies and Liverpool's six) with a place in the last four awaiting the winners. 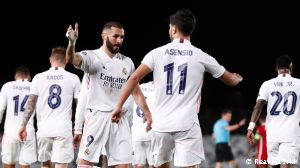