Real Madrid claimed a 92-77 win in the final in A Coruña.
On 13 April 1972, Real Madrid secured the club's 14th Spanish Cup crown. A Coruña played host to the final between Real Madrid and Joventut, in which out team ran out 92-77 winners. Emiliano (26 points) led the scoring for Pedro Ferrándiz's charges, who clinched the trophy for a third successive season, with all of these triumphs coming against the same opponents.

Real Madrid finished top of the group thanks to five wins and a draw, before downing Barcelona in the semis following an aggregate 132-130 win. In addition to this crown, the team completed the double by landing the league honours. 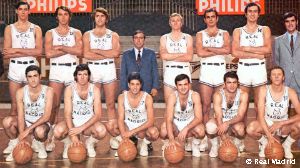