Zidane's men welcome the English outfit in the first leg of a tie between sides that have lifted the European Cup 19 times between them (9pm CET).
The Champions League quarter-finals kick off tonight with one of the most attractive contests you could wish to see as Real Madrid and Liverpool bid to take a step closer to the semi-finals at the Alfredo Di Stéfano (9pm CET). The game that instantly comes to mind is the Kiev final that saw our team lift the club's 13th European Cup crown in the sides' most recent meeting.

However, when Europe's big hitters go head-to-head there's no such thing as a favourite. Real Madrid and Liverpool have captured 19 European Cup crowns between them (19 trophies for the Whites to Liverpool's six) and everything would suggest that this will be a highly even contest. In the teams' last six encounters, each side has three wins apiece, with the last three clashes going the way of the madridistas, who are also vying to extend an 11-match unbeaten streak.

“Our strength is in the collective”, commented Zinedine Zidane in his pre-match press conference, where he was joined by Nacho, who stressed that: “ We'll have to give our all to secure a good result”. The coach has named a the following squad for this key encounter, which will be overseen by Félix Brych.

Liverpool
Jürgen Klopp's troops come into the Champions League last eight after winning Group D, ahead of Atalanta, Ajax and Midtjylland, and having accounted for Leipzig in the round of 16. Liverpool have conceded just three times in the competition and the trident formed by Mohamed  Salah (five), Diogo Jota (four) and Sadio Mané (three) have struck 12 of the team's 14 goals in this term's continental campaign. 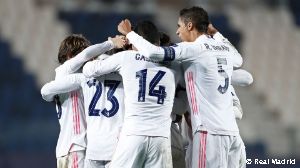