1
2
Real Madrid were unable to get the better of Levante on their return to the Alfredo Di Stéfano. The opening fifteen minutes were played at a break-neck pace, with the hosts carving out the first chance with just  7 minutes on the clock. A swift counter-attack was started by a marauding Hazard, who passed to Benzema, but Aitor Fernández got in the way of his fierce shot. Two minutes later, the moment that marked the remainder of the encounter. A long ball was played in behind the defence and Sergio León fell in a tussle with Militão as he approached the area. The referee consulted VAR and headed over to the pitch-side monitor, before deciding to switch his initial yellow card to a straight red for the madridista centre-back.

Madrid were now facing over 80 minutes a man down but they quickly went ahead before the first quarter of an hour was out. Kroos picked the ball up near his own box and caressed a beautiful pass with the outside of his boot for Asensio. The forward drove from his own half towards the opposition area and beat Aitor Fernández with a right-footed finish. Levante looked to respond but Courtois was in superb form, producing a fine double save from Roger inside the box on 25’. Three minutes later and the Whites could have been further ahead. A Casemiro long ball was controlled beautifully by Asensio in the box but his effort failed to find the target.

Chances
In the next dangerous move, Levante got the equaliser with just over half an hour gone. Miramón set up Morales who scored from close range with his right foot. After 36 minutes, Melero played a through ball in to the path of Roger, whose shot was kept out by Courtois. After the break, Real Madrid's first dangerous chance of the game came through Kroos, who won the ball back on the edge of the area and played in Benzema who missed the target with his left-footed effort.

As the minutes ticked by, with 64 on the clock, the referee awarded a free-kick after a foul by Vini Jr. on the edge of the box, but after consulting VAR, he awarded a penalty. Courtois denied Roger from the spot. The same players were involved again 15 minutes later, but the outcome was very different. Roger received inside the area and beat the keeper to give Levante the three points 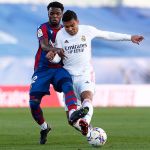