The teams previously met in the 1946 and 2012 editions of the competition.
Real Madrid's Copa del Rey campaign kicks off with a one-legged round-of-32 encounter against Alcoyano at El Collao (Wednesday, 9pm CET). This will be the third time that the two sides have faced each other in the Copa.

The first clash came at the quarter-final stage of the 1945/46 edition, when Real Madrid visited Alcoy in the first leg, a game which ended in a 2-2 stalemate courtesy of strikes from Nazario Belmar and Sabino Barinaga. The return leg saw the madridistas run out 2-0 winners at the Bernabéu thanks to efforts from Pruden and Barinaga as Real Madrid advanced to the semis, before going on to capture the club's eighth Copa crown.

Benzema brace
The two clubs renewed acquaintances in a two-legged tie in the Copa del Rey last 32 in the 2012/13 season. Real Madrid claimed a 4-1 first-leg win on the road, with Karim Benzema at the double and goals from Kaká and José Rodríguez. In the return clash, the hosts recorded a 3-0 victory, with José María Callejón (two) and Ángel Di María on the scoresheet. 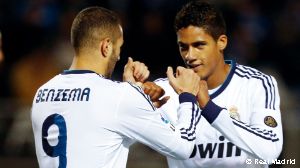