The win over Granada was the team's sixth in a row thanks to goals from Casemiro and Benzema.
Alfredo di Stéfano

0
Real Madrid continued their fine run of form in the closing stages of the year with a win over Granada, their sixth in a row, as they closed out 2020 at the Alfredo Di Stéfano. The first half was a very evenly-matched affair but Zidane's men stamped their authority on the game after the break, enjoying the lion's share of the chances before Casemiro and Benzema struck to seal the points.

The first opportunity of the game fell to Puertas, who shot over the bar from near the penalty spot after having been played in by Soldado. Madrid hit back immediately with a Benzema effort which ended up in the side netting following a deflection off Vallejo. With 15 minutes on the clock, Kroos nearly produced a carbon copy of his goal against Athletic with a shot from distance, but this time the ball flew just wide of the post. As the half wore on, both sides proved patient in their build-up but were lacking any real clear-cut chances. Rodrygo then had to be taken off due to injury with 38 minutes gone.

Asensio replaced him and the Whites soon had the chance to take the lead before the break but Domingos Duarte cleared a Benzema effort after a pass from Valverde and was then in the right place to hack away an Asensio cross into the six-yard box. Before the hour mark, Real Madrid had a triple chance. First, Carvajal's cross from the right found Asensio, who hit the post. The ball fell to Kroos but Rui Silva kept him out. Finally, Valverde shot from point-blank range, but the goalkeeper again came to Granada's rescue.

Onslaught
The team from Granada could do nothing about the Madrid onslaught. Asensio played in a measured left foot delivery to the back post where Casemiro was on hand to head home. The visitors went in search of the equaliser but Isco and Vini Jr. both had chances to extend the lead. Ultimately though it was Benzema who made it 2-0 in injury time to wrap up a very important victory before Christmas. The team now switch their attentions to the last game of the year against Elche. 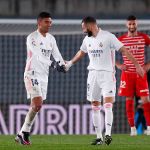