Madrid conceded two goals, Casemiro reduced the deficit on 86’ and Isco curled a shot onto the bar in stoppage time.
Alfredo di Stéfano

2
Real Madrid slipped to defeat against Alavés after getting off to a bad start. Florian Lejeune's header inside the area hit Nacho's hand and Lucas Pérez converted the penalty to make it 1-0 to the visitors. The Whites almost drew level in the 20th minute when Eden Hazard won back the ball in the centre, drove to the edge of the box and his powerful shot was parried by Fernando Pacheco. The ball came back to the Belgian, who cut inside Rubén Duarte and went down in the area.

The hosts almost found themselves 2-0 down, but Thibaut Courtois made a brilliant save to deny Lucas Pérez when the striker was one-on-one with the keeper on 25’. From this point, Madrid grew into the game, despite seeing an injured Hazard replaced by Rodrygo on 29', and deserved to be on level terms. Toni Kroos almost equalised on 39’ when the German only had Pacheco to beat, but the keeper saved the first shot and then the midfielder's rebound. One minute later, a cross from Lucas Vázquez was headed goalwards by Mariano but straight into the keeper's hands. In the 44th minute Víctor Laguardia tugged at Marcelo's hair, bringing down the Brazilian in the area. But the referee didn't award anything or consult the VAR.

Chances
Madrid's task became even harder at the start of the second period. Thibaut Courtois looked to play the ball out to Casemiro, only for Joselu to intercept and send the ball home with 49 minutes on the clock. Real Madrid poured forward, whilst Alavés sought to hit the hosts on the counter-attack. In one of the visitors' breakaways, Courtois prevented a third goal when he thwarted Lucas Pérez in a one-on-one. Rodrygo and Lucas Vázquez tried to find the far post with shots that flew narrowly wide of the Alavés goal on 73' and 75'.

Isco denied by crossbar
A more clear-cut opening went the way of Mariano, who met Lucas Vázquez's 83rd-minute cross with a thumping header, but Florian Lejeune saved the day as he headed the ball off the line. Three minutes later, Martin Ødegaard swung over a corner that was flicked on by Raphaël Varane to Vinicius Jr., whose effort was parried by Fernando Pacheco and Casemiro pounced to halve the deficit. The madridistas came a whisker away from levelling matters with a sublime strike from Isco from the edge of the area, but his effort crashed against the crossbar and no further goals were forthcoming. 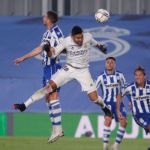