The team chalked up a fifth straight win in the match-up against Monbus Obradoiro. Tavares made the difference with 14 points, nine rebounds and a PIR of 27.
WiZink Center
84

77
Real Madrid downed Monbus Obradoiro in the rearranged Round 5 match-up to remain top of the pile (on basket average) and unbeaten in the league, where the team has recorded five wins on the spin. This was an even contest that the Whites tipped in their favour in the closing five minutes, thanks to a decisive 17-7 run. Tavares shone brightly, posting 14 points (7/7 on two-pointers), nine rebounds, four blocks and a PIR of 27. Other standout performers were Laprovittola (19 points, 4/4 on treys and a PIR of 20), Deck (13), Thompkins (12) and the formidable Taylor in defense, who has now moved up into third place in Real Madrid's foreign appearance maker standings (340).

Pablo Laso's charges returned to league action nine days after victory in Gran Canaria following the postponement of Sunday's road trip to Bilbao Basket and  did so against the third-placed guests and without Abalde, Carroll, Randolph, Causeur and Tisma. Both teams flexed their offensive muscle in the opening stanza, with a high-tempo first quarter in which there was no separating the teams. Real Madrid was enjoying success under the basket (Tavares netted six points and Deck five), whilst Obradoiro was faring better from the three-point line, with Robertson posting three of his team's six treys (23-25, min.10).

Neither team takes command
There was no charge to the script at the start of the second stanza in terms of the parity as the team traded blows on the scoreboard, although the shooting success rates did drop off. Obradoiro was stronger in this department and was paced by an inspired Robertson (21 points at the break). Laso's men were failing to convert their fine work in turnovers into points. Many players were contributing in the scoring stakes but no one player was leading the team, which saw the guests lead 40-44 at the interval.

Obradoiro began the second half in similarly fine form from the 6.75m line. Two Beliauskas triples opened up an eight-point lead for the guests (42-50, min. 24). This was a prelude to the best spell of the game for the madridistas, whose reaction was based on solid defensive work. The hosts truncated the opponent's route to the basket and discovered greater pace in offense and had success on the outside through Laprovittola. A trio of treys from the Argentine saw Madrid tear up an important run of 19-4 as the Whites changed the complexion of the game to establish their biggest lead of the night with 30 minutes played with the score at 61-54.

Whites produce their best
However, this contest was all about runs of form and the guests cancelled out that lead right at the start of the fourth stanza with a run of 6-16 (67-70, min. 35).
Madrid's riposte was immediate and strong. Now was the time to deliver and the Whites produced their most solid form. Taylor defended against Robertson, whilst Tavares shackled the guests' offense, which had no answer to the madridista defense, with his blocks. In offense, Laprovittola put in another dazzling display, whilst Deck and Thompkins paced the decisive 17-7 run that secured a fifth league win (84-77, min. 40). The end of this week promises to be a thriller for the Whites who have the Clásico on Friday and are in derby action on Sunday. 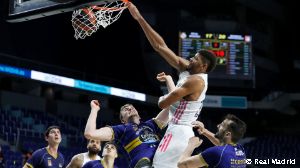 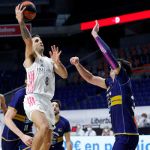