The Brazilian's strike was reward for Zidane's side's dominance in their first game of the new campaign at the Di Stéfano.
Alfredo di Stéfano

0
Real Madrid clinched all three points in their first game back at the Alfredo Di Stéfano this season. A second-half Vinicius Jr. effort was enough for Zidane's men to come out on top against Valladolid and take their second successive LaLiga win. The first half finished goalless, but there were enough chances to break the deadlock. The first fell to the hosts about ten minutes in when Jović linked up with Marcelo and Valverde pounced on the rebound from the Brazilian's shot, only to see his volley kept out by a superb Roberto save.

The madridistas were wreaking havoc again seven minutes later. Valverde played a slide-rule pass from the right towards Jović, whose first-time left-footed strike from inside the box flew just wide of the Valladolid goal. The minutes ticked by and Real Madrid's dominance was becoming clearer all the time despite not being reflected on the scoreboard - and that wasn't for a lack of chances. Modrić controlled well in the box and laid the ball to Jović on 35’ but the Serbian striker crashed his shot into the side netting.

Casemiro hits the bar
Fortune didn't seem to be favouring Zidane's charges tonight, and that was reiterated following the half-time break. Modrić whipped in a corner with 49 minutes gone, Jović rose to connect with a thumping header which Roberto did incredibly well to keep out, before Casemiro was denied by the crossbar on the follow-up. The visitors then responded swiftly and Courtois had to be alert with 55 on the clock to keep out a fine Weissman effort from the edge of the box.

A minute later, Zidane brought on Asensio, Carvajal and Vinicius Jr. in place of Jović, Odriozola and Isco as he looked to freshen things up. The goal soon arrived thanks to one of the substitutes in the 66th minute. Vinicius Jr. stole the ball on the edge of the area and Valverde played in Benzema, but Carnero read it well. The ball then struck his team-mate Bruno and fell to the feet of the Brazilian, who finished superbly to put Real Madrid ahead.

Second successive clean sheet
The hardest part of the job had already been done and at the other end, Courtois excelled, keeping out two good efforts from Raul Garcia and Waldo to keep the home team in front. These were the only incidents which threatened Real Madrid’s lead as the home side kept possession and also had the chance to get a second on three separate occasions. The first from a Benzema shot from the edge of the area with 15 minutes to go, but Roberto kept him out. The second chance fell to Modrić, who, after stealing the ball on the edge of the area, struck the post with a right-footed shot. And lastly, in stoppage time, Vinicius Jr got through one-on-one, but Roberto stood up well. 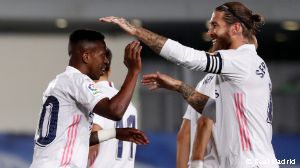 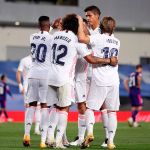