In the 1990/91 season the defender scored a fine header against Betis at the Benito Villamarín stadium.
This week's star of Historic Goals is Hierro. The defender joined Real Madrid from Valladolid. He started out as a midfielder, but over the years he ended up becoming one of the best defenders in the history of Real Madrid and Spanish football. The Andalusian's many qualities included his exceptional free-kicks and his aerial strength.

The goal we have chosen this week was a header against Betis. Real Madrid visited the Benito Villamarín stadium on matchday 31 of the 1990/91 league season. Hierro scored the third Madrid goal after getting on the end of a good cross from the right and scoring with an unstoppable header past the goalkeeper.
Hierro played 14 seasons for The Whites, totalling 601 official matches and scoring 127 goals. His brilliant record consisted of 16 league trophies: 3 European Cups, 2 Intercontinental Cups, 1 European Super Cup, 5 league titles, 1 Copa del Rey and 4 Spanish Super Cups. 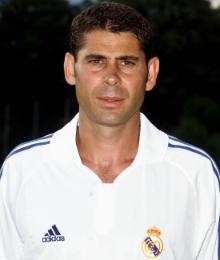