The Whites downed Casademont Zaragoza in the team's fourth friendly of the pre-season campaign. Thompkins, who posted 13 points, top-scored for the madridistas.
Real Madrid City

75
Real Madrid chalked up a fourth straight win in the match-up against Casademont Zaragoza ahead of the Super Cup, to be contested in a week's time in Tenerife. This victory sees the Whites maintain their unbeaten record during pre-season following a strong all-round performance and the team's best offensive showing to date. All 12 players netted points, with Thompkins (13 points), Campazzo and Taylor (11 apiece) leading the way.

Real Madrid made a strong start in defense with the imposing presence of
Tavares, who recovered from the ankle sprain against Betis, to boss proceedings in the opening stanza (19-9). Campazzo (five points) and the Cape Verde-born man took charge of posting points for the Whites' in a starting five that featured another piece of good news with the return of Causeur, the only madridista who was yet to have featured this pre-season. Casademont Zaragoza upped its game in a far more frenetic second quarter in which the Ennis-Hlinason duo paced the guests to a run of 8-18 that tied the contest at 29-29 in the 17th minute.

Taylor and Tavares stepped up to breathe life into Pablo Laso's charges before the interval (41-35). Campazzo and Thompkins contributed in the offensive stakes in the third stanza and Real Madrid, who was now enjoying far more success from the three-point line, pulled away again and opened up a lead of over 10 points on several occasions. The Whites led by up to 29 points in this quarter, with Thompkins posting the last eight in a row, to establish the team's biggest lead of the game (70-57).

Top-notch substitutes
In the final stretch of the match, the Whites gave Casademont Zaragoza no chance of getting back into the game as the team displayed its strength in depth.
Abalde, Alocén, Randolph and an inspired Rudy from the three-point line ensured the hosts' lead was extended. With five minutes remaining, Real Madrid held a 20-point advantage. Another fine defensive performance in this quarter saw the team round off a stellar team display and the best showing in offense, with 91 points on the scoreboard. Florentino Pérez was in attendance at Real Madrid City, and spoke to the players before the game, which ended in a 91-75 win. 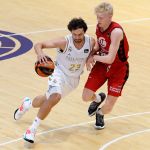