The captain will remain with the team for a further year, having already won 22 titles and eclipsed 1,000 appearances.
Felipe Reyes is set for yet another season playing for Real Madrid. It will be his seventeenth at the club following a contract renewal until 2021. A symbol of madridismo and captain of a legendary side, the center is the only player to have reached 1,000 Real Madrid appearances, giving him time to win 22 titles.

At his nearly 41 years of age, there are few records left to break for Felipe Reyes. He holds the Euroleague appearances record (352), while he is also the competition's leading offensive rebounder (702) and top three in total rebounds (1,793), defensive (1,091) and two-point field goals (969). In the ACB, where he made his madridista on 3 October 2004, he holds the all-time appearances and rebound records.

The captain's numbers
Reyes is the oldest player to pull on the Real Madrid jersey. He's been with the Whites for 16 seasons already and next term he's set to equal Corbalán and Romay, just one behind Rullán. He has played 1,029 matches: 608 in the league, 340 in Euroleague, 41 in the Copa del Rey, 22 Super Cup, 16 ULEB and 2 in the Copa Intercontinental. His trophy haul totals 22 titles: 2 Euroleagues, 1 Intercontinental Cup, 7 leagues, 6 Copas del Rey, 5 Super Cups and 1 ULEB Cup. He has been voted ACB League MVP on two occasions, has appeared in the Euroleague's best five once, was twice MVP in the league finals and has been part of the ACB best five four times. 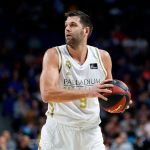