The US power forward was instrumental in the team's Décima triumph.
Trey Thompkins will remain at Real Madrid until June 2022 after putting pen to paper on a two-season contract extension. The US-born forward has become one of the key figures in the paint for the Whites, with whom he has made 232 appearances and lifted the following 10 trophies since he checked in back in 2015: one EuroLeague and Intercontinental Cup apiece, three league titles and a trio of Copas del Rey and a pair of Super Cups.

Real Madrid has secured the continued services of one of Europe's most talented tall men. Capable of sinking points from anywhere on the court, thanks to his offensive weaponry and powerful wrist, Thompkins starred in the 2018 Final Four in Belgrade, where he average a PIR of 18 across the two match-ups and proved decisive as the team lifted the club's 10th European Cup. This season he has been the madridistas' second-highest points-scorer in the EuroLeague, averaging 10.8 points per game and posting a success rate of 48.5% on triples. 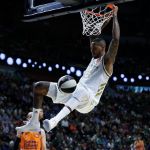