"What we're here to present today is the result of a great friendship, which will remain solid as we look to share in the successes to come", declared Florentino Pérez.
The presidential box at the Santiago Bernabéu hosted the ceremony staged to renew the sponsorship agreement between Real Madrid and Mahou Cinco Estrellas. Florentino Pérez and Eduardo Petrossi, managing director at Mahou San Miguel, presided over the event, which was also attended by members of the first-team team squad, Casemiro and Fede Valverde, and former player and current club ambassador, Álvaro Arbeloa.

In his address, the Real Madrid president commented: "Throughout all of this period, you've shown yourselves to be a good companion on our journey. What we're here to present today is the result of a great friendship, which will remain solid as we look to share in the successes to come. It's an honour for this club to share success with a company that's over 100 years old, Spanish and Madrid based, a firm that's family-oriented, a leader in the beer industry and a company that helps to fly the flag for the Spanish brand right across the world".

Constant presence
"The Santiago Bernabéu is a symbol of our ambitions. It's also your stadium. You've had a presence here from the outset and it's here that you've held a relationship with football and the fans of the game. This is our meeting point. The greatest stadium of the 20th century, where Mahou Cinco Estrellas and Real Madrid will continue to share our values and dreams together".

"Tomorrow sees this club celebrate its 118th anniversary. Much of the club's history has been written in this very stadium, the Santiago Bernabéu, where Mahou Cinco Estrellas and Real Madrid have shared the same emotions and dreams with our fans".

"We're here today to present a partnership renewal that shows Mahou's loyalty to Real Madrid and sport. This is a lifelong commitment. Because this strategic partnership, which will continue to bring us together, was initially established during the 1940s, when Mahou started to manage the bar in this stadium".

Unforgettable moments
"We've travelled together on a long journey that's featured some difficult times and some unforgettable joy. In recent times, we've shared in one of the most glorious period in our history, in which we've won four European Cups in five years".

Business end of the season
"We're now entering the business end of the season, in which the support of the Real Madrid fans will continue to play a vital role as we seek to overcome every challenge, including those that may appear to be impossible. Our football team has lifted the Spanish Super Cup, whilst the basketball team also won the Spanish Super Cup and the Copa del Rey. We've won three trophies so far this season and these represent the biggest incentive for us to aspire to win more silverware".

Time capsule
Arbeloa, Casemiro and Valverde then placed three objects in a time capsule, which will be opened in several years' time and represents the cornerstones that this agreement is based on: commitment and the future. Arbeloa put a bottle of Mahou beer and Casemiro brought a shirt from the last Estrellas de Mahou match, whilst Valverde placed a folder featuring Real Madrid's trophy haul and the awards won by Mahou into the capsule. The trio then added the plans for the new Santiago Bernabéu stadium, before proceedings were rounded off with a group photo, in which the trident posed alongside Florentino Pérez and Eduardo Petrossi. 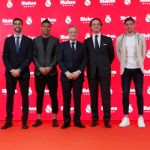