During the event, in which the European Cup was present, Florentino Pérez sent a message to the supporters clubs. The president highlighted the work they do every day in favour of the Madridista feeling and as a key element, both in Spain and all over the world. He also indicated that the the supporters clubs events have a great meaning because everything that Real Madrid is, is due to those who work day by day so that the club is bigger.

Another aspect that he highlighted is the beginning of the year for the team, in which the Spanish Super Cup has been won in a place with lots of Real Madrid fans, and in which the size of the club was noticed. Finally, he thanked the supporters clubs for their work and encouraged them not to lower their guard and to continue working as they are doing. 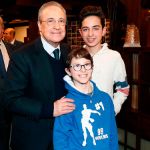