The Whites got a win over Sevilla with four goals from Reyes and one from Jaime to win the trophy for the eighth time.
The Real Madrid Under-13s won the XXIV LaLiga Promises International Tournament in Abu Dhabi, at the Hazza Bin Zayed Stadium. The Whites came back from being 2-0 to Sevilla with 4 goals from Reyes, who was voted MVP and was top scorer in the tournament, and Jaime scored a goal. The madridistas wion the trophy for the eighth time, making them the most succesful.

The final was a tough one as Sevilla went ahead on the scoreboard immediately. Paulo then took a chance for the Whites, attacking on the left, and then tried his luck from a free kick. On 13 minutes, Dani scored his second goal following a a corner kick and made the 2-0. But Real Madrid never give up and reduced the deficit before the break.

Reyes, unstoppable
Reyes connected with a corner taken by Melero to make it 2-1. And in opening moment of the second half, it was Reyes again, who had previously been given a jersey of his father’s at the start of the game, who took a penalty and levelled the game. Reyes also scored the third goal from a free kick from far out, and the fourth with a rocket of a right-footed shot. Sevilla fought back and made it 3-4, but with three minutes to go, Jaime killed the game off and rounded off a thrilling final.

THE ROAD TO THE FINAL

Semi-finals
-RM Under-13s-Villarreal (3-2)
The Whites attacked well in the opening five minutes as Paulo and Reyes scored the first goals. They needed a third in the second half,, and Reyes did so, to beat Villarreal and see out a great torunemanrt

Group Stage
-RM Under-13s-PSG (1-0)
The madridistas started with a win over PSG. Carlos scored the game's only goal, netting in the first half.

-RM Under-13s-Villarreal (0-2)
In the second game of the tournament, Juan Carlos Duque's side were beaten by Villarreal, who went ahead in the first half and then killed the game off in the second. 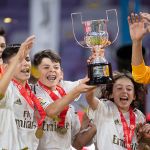