“Our challenge is to keep winning on an international football stage which is increasingly complicated and competitive”, added the president in the opening speech at the Ordinary General Assembly 2019.
Real Madrid president Florentino Pérez opened the General Assembly of Delegate Members 2019, held at the basketball centre at Real Madrid City, with a speech which started by paying tribute to the members and other madridistas who passed away last season, including executive Ángel Luis Heras Aguado, Bernabéu delegate Agustín Herrerín and various former football and basketball players. He also gave touching tributes to Blanca Fernández Ochoa and little Xana, the daughter of former national team coach and Real Madrid player Luis Enrique.

In his speech, the president said: “This is a united club and that's our strength, the strength of madridismo. We have to understand that this team had won everything there was to win in a unique and historic cycle which saw us lift 17 titles in the last 9 seasons. An almost inimitable cycle. It's been a difficult season and we've all taken stock where necessary because we need to turn the situation around. Don't be in any doubt that we will do just that”.

“By placing great demands on ourselves, we must carry out the transformation required which will allow madridistas to dream of new successes and titles. Our challenge is to keep winning on an international football stage which is increasingly complicated and competitive. And of course, we need to recover that hunger for success. The desire that has been a crucial factor in enjoying one of the best eras in our history”.

The squad
“We know what these players have achieved and they deserve our respect and gratitude. Nobody had won 3 consecutive Champions Leagues but these players and this coach, Zinedine Zidane, managed it. Nor had anybody won 4 Champions Leagues in 5 seasons. I must recall that when I came back to take on the presidency in 2009, we sat at 13th in the UEFA ranking. Today, Real Madrid are still the Club World Champions, as we have been since 18 December 2016, that's, 1,001 successive days”.

“These are unquestionable statistics in acknowledging and assessing the merit of this squad, but this summer, Real Madrid has made a real effort in something very difficult, which is improving a winning squad made up of extraordinary players which are already part of our club's history and which contains the current holder of the Ballon d'Or and FIFA's The Best, Luka Modric. On the 23rd of September, FIFA's annual gala will be held and 9 players from the current Real Madrid squad are up for a place in the FIFA World XI: Modric, Sergio Ramos, Marcelo, Varane, Carvajal, Kroos, Casemiro, Hazard and Benzema”.

Reinforcements
“This club has undertaken great financial efforts this summer to renew and strengthen our wonderful squad, one of the most valuable in the world. We've brought in 6 new players, reinforcing every element of the team. Among them, Eden Hazard, one of the best players in the world who has brought hope to madridismo, as we witnessed in his presentation at the Santiago Bernabéu and as was acknowledged a few days ago when he was voted best player of the last Europa League campaign. Alongside him, Luka Jović, Ferland Mendy, Eder Militão, James, Rodrygo have come in, as well as goalkeeper Areola, who arrived to replace our dear Keylor Navas”.

“We believe in our academy because it's part of our identity. This site where we all stand now, Real Madrid City, pride of madridismo, is where our youngsters are trained in football and in life. It's where the values of our club are instilled in young madridistas. Our academy is a benchmark for the world of football. There are some 172 players from the Real Madrid academy playing in professional leagues”.

Transforming the Bernabéu
“We're incredibly excited to convert the Santiago Bernabéu into a unique stadium and our Real Madrid City will continue to grow and set the standard for the world's best sports centres. The stadium of the 21st century is beginning its transformation. This remodel will make it the best stadium in the world. It will be more comfortable, more accessible, safer, and a worldwide pioneer in architecture and technology. A stadium which is unique in its location, in the heart of the city. It will be a ground-breaking icon, the image of Real Madrid and the city of Madrid. We're standing before an exciting challenge to continue the path and the model which Santiago Bernabéu set forth: a Real Madrid which leads the way in sporting terms, financial terms and also with its facilities”.

Basketball
“Real Madrid continue to make history in basketball. Here we have our 35th League trophy and the fifth Spanish Super Cup. Our basketball team is reinforcing its leading status in the sport with a hegemony which will be difficult to equal. A team full of players who are already Real Madrid legends and with a coach, Pablo Laso, who has already written his name alongside our greatest coaches”.

“We're in the midst of a historic cycle of 17 titles in the last 8 seasons. This all demonstrates this team's ability to fight for every trophy and continue to stimulate the dreams of every madridista. A team which reaches beyond borders to become something truly wonderful: Real Madrid Basketball has the third most followers in Facebook of any basketball team worldwide, including the NBA”.

Financial strength
“Every year we break our own revenue records. Last season, 18-19, our operating revenues hit 757 million euros, surpassing those of the previous season. During the period 2000-2019, revenues have grown at an average rate of 10.5% per year. I would also like to highlight that the alliance with adidas has been extended to 2028 and the renewal terms are unprecedented in sports industry history”.

Our members
“The Real Madrid members are owners of the biggest club in the world. It's a privilege but also an enormous responsibility because we are in charge of preserving the values of Real Madrid, those which have been instilled by our parents and which we will teach our children. This is a united club. The unity of the members and all madridistas has been essential in achieving all we have managed in this historic cycle. It must continue as such. That is our strength, the strength of madridismo. This badge and this shirt are, for many people, the most important part of their lives. This is Real Madrid, a club which is unique in football and basketball. A club of the 23 European Cups”.

Real Madrid City
“We are holding this Assembly today in our home. At a Real Madrid City where madridismo's hopes are crafted and where our values are strengthened every single day. Here, we will continue to grow in a space which is already an international benchmark in terms of modern sporting infrastructures, adding to Real Madrid's prestige throughout the world. It is our greatest asset. 120 hectares and 360,000 square meters of buildings in our Real Madrid City. A legacy which will remain for new generations of madridistas and of which we can be immensely proud”.

Real Madrid Foundation
“It's the soul of our club. We will continue our strong commitment to solidarity. Our Foundation is still the largest non-profit organisation in the field of education in values through sport. We grow every year and are now present in over 100 countries, with more than 1,000 projects and activities being run across the world. Each year, we help a total of more than 100,000 people through our Foundation”.

Our media
“We are still the institution, sports club and the brand with the largest worldwide audience. The Real Madrid social networks have topped 320 million followers. The official Real Madrid website is, for the third year in a row, the most visited football club site in the world, with triple the views of second place, boasting almost 3 million unique users per month. Our TV channel has now been free to air for the last three years in HD and is a vital link to the club for our members and fans”. 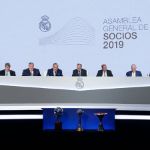