The Whites, who went a man down in the 10th minute and were losing 0-2 at half-time, drew in the second with goals from Bale and Asensio.
FedExField (Landover, Maryland)

2
Real Madrid drew with Arsenal in their second preseason clash in a penalty shoot-out decider. The Whites came from 0-2 at the break with a super second-half reaction, marred only by an injury to Asensio. It was he and Gareth Bale who got the goals to bring the madridistas back into the game.

Things weren't easy from the get-go. Lacazette went round Keylor Navas on 8’ and his shot was blocked on the line by Nacho's left hand. The referee signalled a penalty and the French forward stepped up to convert, while the centre-back was sent for an early bath. The team now had to handle the remainder of the clash with a player less than their opposition, who were also further into their preseason campaign, and the score against them.

Sokratis sees red
Zidane had to shuffle his pack and with just over 15 minutes gone, he sent Varane on in place of Jović. That saw Real Madrid enjoy one of their best spells, as Mendy looked a menace down the left-hand side. With the Whites now on top, a rapid counter-attack ended with Aubameyang netting a second on 24’. It was getting even tougher for Madrid, but they refused to buckle as they looked to get on the score sheet. The minutes ticked by, and with 5 to go before the half-time break, the numbers were level once more when Sokratis was sent off for a second yellow card.

From there until the end of the half, Real Madrid had their rivals pinned deep in their own area in an attempt to reduce the deficit before heading down the tunnel. They came close to doing just that in the 44th minute when Modric sent a lovely through ball to Carvajal, who whipped in a dangerous ball first time but goalkeeper Emiliano Martínez just took it off Benzema's toes. The French forward then had an even better chance in injury time as he got on the end of a Kroos cross but his header could only find the post.


Marcelo, Isco, Bale, Asensio, Courtois and Odriozola came on at the break in place of Mendy, Hazard, Benzema, Lucas Vázquez, Keylor Navas and Carvajal. It was one of the new faces who set the alarm bells ringing for Arsenal early in the second half. Asensio controlled the ball on the edge of the box and surprised everyone with a vicious shot which struck the upright on 52 minutes - the second time the Whites had been foiled by the woodwork.

Level inside three minutes
The madridista dominance was clear now and a goal to reduce the deficit looked only a matter of time. And so it proved when Marcelo threaded a fine pass to Isco to play in Asensio, who brought the ball down beautifully to go one-on-one with the goalkeeper on 56’ and Bale was on hand to turn home the rebound. Just three minutes later the Whites' insistence paid off and the game was level. Man of the match Marcelo was once again involved, playing the ball to Asensio, who took the Brazilian's pass and fired over Emiliano Martínez and into the net.

Real Madrid had shown once again how they are able to respond to any questions asked of them and as the 65th minute came around, Zidane brought on Seoane, Fidalgo, De la Fuente and Vinicius Jr. for Kroos, Modric, Ramos and the injured Asensio. The Brazilian youngster got in on the action immediately, crossing for Bale, who forced the Arsenal goalkeeper into a good stop with a back-heeled effort. The English side had their chance to score as well, Chambers powering a fine strike towards goal but Bale was on the line to clear on 76’. The Whites response was swift, and three minutes later the Welshman's attempt with the outside of his boot flew inches wide. Courtois then stood strong in a one-on-one against Nketiah in the 87th minute to take the tie to penalties, where Real Madrid ran out winners in the clash which truly was a game of two halves. 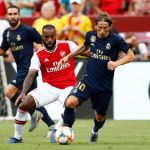