“It’s a great result in terms of the goals and the clean sheet”, said Nacho.
Odriozola assessed the team’s win over Leganés for the press, following the Copa del Rey last-sixteen first leg: “You can’t even imagine, we’re thrilled to have put the tie firmly in our favour and try and get back on a positive run. We’re very pleased, we want things to be going well more than anyone. We have to stick together, players and fans, it’s still January, we’ve got a long way to go in the season and we’re going to go for everything we can”.

“Vinicius Jr. is amazing both on and off the pitch, he’s fantastic. He’s got immense quality, he’s being asked to work hard and is doing a brilliant job. We’re thrilled with him”.

Penalty
“I dribbled into the box and felt a touch from behind, which at the pace I was moving brought me down. It’s a clear penalty. Just before, there was a similar move and he didn’t get the ball, there was contact and I thought the ref could have blown for that one too. There’s a lot of talk about the officials, but none of them want to screw over one team or another".

"We’re Real Madrid and we can’t make any excuses. All we can do is work hard to turn our situation around. If this institution has shown me anything at all, it’s that excuses are worth nothing. Everyone knew it was a penalty the other day but it wasn’t given. I don’t like to think too much about these things, Madrid is above refereeing decisions and making excuses. Now we have to work to turn this around”.

"In the second half we dominated the game and they didn’t cause us any problems. The same goes for the first half too, although they came close a couple of times, but that always happens because the opponent tries to compete".

Confidence
"We’ve had two games that didn’t work out how we wanted, in LaLiga the results haven’t been good. We work hard during the week and when the weekend comes and things don’t come off, there is a bit of disappointment. We put in a great performance and that anger could be seen out on the field. We need to string together 3 or 4 wins and pick up confidence, we hope that today is the first of many".

Vinicius Jr.
"I said it a long time ago. If Vinicius continues working as he's doing and surrounds himself with people who support him and give him the confidence to carry the weight of a club like Real Madrid, he has a bright future. His teammates will fight with him until the end and he’s showing that he’s a great player".

Reguilón: "Finishing is what defines many matches"
"The fans support us and pick us up which is very nice. Today it was a very good atmosphere and that’s what we all want. The problem is that in other games we haven’t scored, but managed to do so today. Finishing or a clinical edge is what defines many matches. I also thought it was a penalty, but we’re going to stop talking about the referees and look forward. The next game is against Betis and it’s very important".

Youth
"It's not a question for me. Those who are picked to go out and play have to contribute as much as possible and from there the results come, the coach decides. Vinicius works hard every day, he's very humble and we hope he's here for a long time".

Cristo: "I'm going to take in everything I can"
"It’s been an exciting day, it’s a challenge that every footballer would want to fulfil. I’m very grateful to the players and the coach. The season is going quite well, taking part with the first team and being involved in their routine, to be able to learn from them and take in everything I can. I'm coming away feeling good because I made my debut at the Bernabéu in a 3-0 win and we were able to play the match how we wanted to". 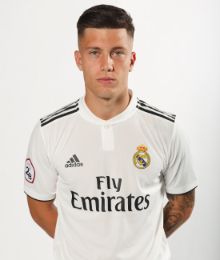