The president was presented with a commemorative plaque at the event, which was a chance to display the recently clinched football and basketball European Cups and the Club World Cup.
The Madridistas Fan Club Federation of the Community of Madrid is celebrating its XXII anniversary. Real Madrid president Florentino Pérez attended the event which took place at the Asador Donostiarra restaurant and mixed with the fans as he was presented with a plaque by the Federation's chief, Luis Cáceres. Also present on behalf of the club were Eduardo Fernández de Blas, second vice-president, and Fan Club Director Manuel Gómez.

The fans at the meeting enjoyed the chance to witness the Champions League, Euroleague and Club World Cup trophies, all won over the course of a historic 2018. Florentino Pérez took advantage of the occasion to send a message to the Madridistas Fan Club Federation of the Community of Madrid, highlighting the fine work they have carried out of the last twenty-two years as a crucial element of madridismo and proponent of the club's values. The present spoke of their continued commitment to the unity of madridismo and how that has proved vital in the team's successes.

He also underlined the importance of their loyalty, reiterating that without the fan clubs, one of the greatest spells of Real Madrid's 116-year history would not have been possible. As it is, the club has enjoyed unprecedented financial stability and has set the benchmark on sporting, economic, institutional and social planes. He finished by encouraging the fans to keep up their good work, based on respect and solidarity, elements which add to the prestige of the club around the world, and a mirror for the values of the Real Madrid Foundation. 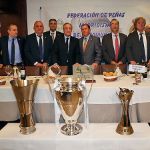