“Those of us with less minutes have to make the most of them”, said Valverde.
Javi Sánchez played for the first time in a competitive game at the Santiago Bernabéu and notched his first ever Real Madrid goal against Melilla. At the end of the clash, the youth graduate was clearly thrilled: “It's a special feeling, I'd already been lucky enough to make my debut, but to do it here at this stadium is unforgettable. A dream come true. I was lucky and got a goal as well, I dedicate it to all the people who have supported me”.

“I'm hugely grateful to the coach, now I have to keep working hard to make the most of the opportunities I get. We knew we were coming home having put in a good performance there and we needed to put the icing on the cake at our ground, so we went out to win it from the off. Congratulations to Fidalgo and Fran Garcia. I know them well and I know how hard they've worked to make their debuts today”.

Valverde: “The game opened up after the first goal”
“We struggled early on, but once we'd scored the first goal, the game opened up, we were able to counter attack more and we tried to make the most of it. We've got three lightning-fast attacking midfielders who were superb today. We won, we're in the next round and those of us who play less minutes have to make the most of it”.

Debutants
“I played under Solari for Castilla, he gave me confidence and that was so important for me. I give it my all every day and for the coach to reward you like this is hugely satisfying. We have to congratulate the debutants, they should enjoy today because it's not often you get to make your debut with Madrid. They have to keep fighting and working hard because that's the road to take”.

"There are players who get more time and there are some who play less. We all put in a shift as much as we can every day and those who play try to play in the best way. It's good for me to play in midfield, I feel comfortable there, but I'll play where the coach tells me to".

Isco and Vinicius Jr.
"Isco is a player that people love, today he showed that, he has true quality. Vinicius Jr. has that little spark that makes him different from other players, today people have clapped for  him and that is lovely".

Vallejo: "Solari has asked us for intensity"
"I feel good, the key is to focussed from the first minute and score a goal. That gives us the confidence to keep on. This was key in the game, the coach has asked us for intensity and to press high. Today went well and we are happy about that. It is important that we are all prepared for when the coach asks, this gives us the rhythm of competition, it is needed."

"We are focussing hard on the attack and defense with waves of attack and the defensive unity of the team. Now it is really important to recover well before the game against Huesca, then the Group Stage at home, and Rayo; because we have to go into the Club World Cup with real determination." 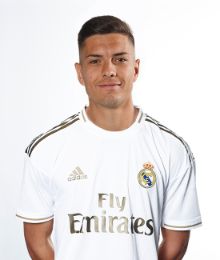