“Our captain receiving this accolade is a source of pride for all madridistas”, said Florentino Pérez at the event organised by newspaper 'El Español'.
Sergio Ramos has received the Best Sportsperson award at the Premio Los Leones 2018, an event organised by El Español newspaper, currently in its third year. The captain picked up the prize at the gala at Westin Palace hotel which was also attended by Real Madrid president Florentino Pérez; Director of Institutional Relations, Emilio Butragueño; Benzema, Varane and former players Roberto Carlos, Raúl and Arbeloa. Fernando Raigal was granted the Solidarity award – which was collected by his family – and Francisco González was acknowledged for his business career.

Florentino Pérez said a few words on Sergio Ramos prior to the award being presented: “Our captain receiving the Best Sportsperson award at the Premio Los Leones 2018 is a source of pride for all madridistas. It is recognition for a career replete with merit, success, sacrifice and hard work and he is an example to his teammates and everyone who loves football”.

Growth
“I must confess, that as Real Madrid president, it fills me with great satisfaction that I was the one to bring that young 19-year-old to the club and present him to the Santiago Bernabéu on the 8th of September 2005. That young man has grown here, developed as a player and as a person while wearing our badge and our shirt and today he stands as a myth and legend of Real Madrid”.

“Having played 576 times as a madridista, he has moved to eighth on the all-time appearances list in a Real Madrid shirt, throughout our 116-year history. In that time he’s scored 76 goals, as a defender, and won 19 trophies: 4 European Cups, 3 Club World Cups, 3 European Super Cups, 4 LaLiga titles, 2 Copa del Rey trophies and 3 Spanish Super Cups. He has been chosen as part of the FIFA World Eleven on 9 occasions, more than any other player in history”.

Challenges
“This is his fourteenth season at Real Madrid and he will be, as ever, absolutely crucial to us in standing up to all the challenges which await us during this campaign. Here at Real Madrid we know that the greater the adversity, the more we strive to achieve the impossible. That is Sergio Ramos and that is Real Madrid”.

Ramos: “I feel extremely valued”
“I would like to express my thanks for this award, firstly to El Español, for having chosen me. It’s an individual prize, but it also acknowledges the hard work and consistency on a collective level. Congratulations to everyone who has picked up an award. This accolade is a source of joy but also serves as motivation to keep working hard. Thank you, president. It’s true that, when faced with adversity, that’s when we are most true to our values and following a poor run, we’re now on the right path. Thank you, I feel extremely valued. Good night and hala Madrid”. 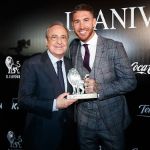