The former Real Madrid player, who scored the winner in the final as the club secured its sixth European Cup crown, passed away on 15 October.
Prior to the kick-off of the LaLiga encounter against Levante, the Santiago Bernabéu faithful held a minute's silence in memory of  Fernando Rodríguez Serena, who passed away on Monday. He netted the winning goal in the final that saw the club clinch its sixth European Cup and came up through the academy ranks at Real Madrid before turning out for the first team between 1963 and 1968. He made 86 competitive appearances as a Real Madrid player and lifted one European Cup and four league titles. 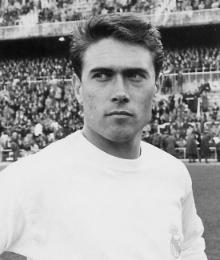