“Coming back home is a young player for whom we have had real hope for a number of years. He's shown his quality and his talent over the last year in the French league and he's earned this opportunity to once again be part of the Real Madrid first team. There's nothing more satisfying for the millions of madridista fans across the world than seeing one of our very own coming home after showing the quality he possesses”.

“This is the start of one of the most important steps in your footballing career. You must set an example of what La Fábrica, our academy, means, the place where are values are instilled and our identity is forged. You should be a symbol of the effort demonstrated by all these youngsters who dream of one day pulling on the Real Madrid shirt”.

Mariano: “I'm coming home”
“Today is a very special day, I'm coming home. I can only thank the club, the coach and the president for allowing me to wear this shirt and defend the colours of the best team in the world. I'm excited to share the dressing room with such great players. I'm going to put my heart and soul into helping the team, making the fans proud and keep making history. Hala Madrid!".

Signing the contract
Before posing with the madridista shirt in the presidential box, Mariano signed his new contract in the stadium's Meeting Room alongside Florentino Pérez. Following the signing, the forward was presented with a watch, a replica model of the Santiago Bernabéu and a shirt printed with his name and the number 7. 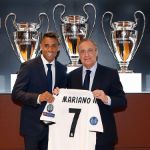