"Vinicius Jr. has just celebrated his 18th birthday, but he's one of the greatest rising stars within world football. He drew us in with his technique, speed, tricks and goals. He's already racked up 70 appearances and has shone with his unique style. He has experience of playing on the world stage, after having featured in the Copa Libertadores, the South American Championship and for the youth teams of his national side".

Sought-after
"He's one of those players who will make his mark on future generations. The biggest teams in the European game were after him because he's a player that offers that creative Brazilian style. The dreams you had were the same as those our fans held and I'm sure that you'll wow them with your ability".

A strong and united Real Madrid
"This stadium houses 13 European Cups, which have guided us on our journey. This badge brings together millions and millions of people from across every continent. We're working to ensure that Real Madrid is increasingly stronger and united. The challenges ahead are major ones, but one of the keys is to make a real commitment to young talent".

"We  must adapt to the new reality within the footballing world, without forgetting about what our academy has to offer, which is key. Each season we assume that Real Madrid should be fighting on all fronts, whilst not neglecting our values. The last few years have been magnificent, but our fans always demand more and we'll work relentlessly with the ambition to continue being a role model as we seek out the brightest talents".

Vinicius: "Real Madrid is the footballing pinnacle"
"This is the best opportunity a football player could wish for. I'm going to put in real effort to show that I deserve to be here. I come from a very modest family and applying myself is nothing new to me. I've lived far away from my parents and siblings because that's what I had to do to achieve success. I’m honoured to have reached the pinnacle, Real Madrid, at just 18 years of age".

"I'll show everyone that I'm ready to play despite my age. I know that it won't be easy to adapt, but I'm ready to do whatever it takes. Thank you to everyone for placing their faith in my footballing ability and I thank my family for everything they've done for me. I will never let them down. I had the chance to choose between the top teams in the world and I went for the best of them all. We're Real Madrid and we always strive for more. Hala Madrid!"

Pen to paper
Before posing for photos kitted out in the Real Madrid shirt in the presidential box, Vinicius Jr. took to board room with Florentino Pérez to sign his new deal. After putting pen to paper, the young forward was presented with a watch and a model of the Santiago Bernabéu. 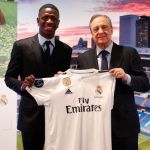