"Being here is a unique feeling, I 've no words to describe it," said the new Whites' signing.
Vinicius Jr. spoke to the media in the press room of the stadium after his presentation in the presidential box and stepping on the pitch at the Bernabéu. The new Real Madrid signing was accompanied by his compatriot Ronaldo, who welcomed him: "Vinicius is a player with a lot of quality and talent. He’s the biggest prospect for the future of Brazilian football. You arrive at an amazing new home. This is where I was the happiest playing football and where I achieved the most important things in my career".

"It may be difficult at first, but it's the best place you could be. All players dream of wearing the Real Madrid jersey and now he has the opportunity to show that he has been sacrificing to achieve his dream. I wish you all the luck in the world in this challenge and we will all be there to take care of you in everything you need".

After the words from Ronaldo, the press conference started, in which Vinicius Jr. said: "I’m very happy. I want to win titles and be successful, giving joy to the Real Madrid fans. I’m preparing myself every day and I’m training to adapt as soon as possible".

First impressions
"Everyone has welcomed me very well and I’m very happy. The club is wonderful and has a structure beyond the normal, which gives me the best in order to play football".

Squad
"It's a wonderful group, that has welcomed me very well. They’re always advising me to adapt quickly. All the players here are my favourites. I’ve only seen them on television and video games. Now I’m training with them and that is inexplicable. I have to work hard to get up to the quality they have".

His position on the field
"I play on the left but can also play on the right. I didn’t notice that the jersey didn’t have a number. The number I choose isn’t important, but I'm going to wear this jersey with great pride and try to give the fans a lot of joy".

"I'm here with Real Madrid's first team and they'll decide if I'm going to play some games with Castilla to adapt as soon as possible. My goal here is always to win more, I'm obsessed with winning. I always want to be at the top and that's why I chose Real Madrid".

Advice from Lopetegui
"He always tells me what to do and on the defensive side I can’t dribble because it’s very dangerous. He always tells me to take on the opponent and go for goal. He’s helped me a lot and I think he’ll help me much more. It's great that he knows a bit of Portuguese because when I have some difficulty he can translate it. He’s teaching me a lot and he’s telling me what I have to improve. My teammates too".

Pressure
"I come from Flamengo, which is a club with a lot of pressure. Everyone gives me the greatest possible support so that I only have to worry about playing. I never think about failing, only about winning. Winning everything in the Real Madrid jersey".

Thanks for Ronaldo words
"He’s a legend and someone I've always followed. My parents have told me that he’s a phenomenon and it’s a pleasure to be by his side. I don’t have words to describe this moment. I can only thank God, my family and friends".

Cristiano Ronaldo and Zidane
"Cristiano Ronaldo is a Real Madrid legend. And Zidane has won lots of titles with Real Madrid as a player and coach. I’m very happy to be here with Benzema, Bale...There are still more players to come back, who are the best in their positions, and I want to play with them and be able to help".

Neymar
"He's my idol and someone I follow very closely. Regarding who I’m like, it’s for you to decide. I’ve come to work hard. I have a dream of playing with him and God willing I will be able to play with him in the national team. My game is more like Neymar's. If I take a bit of him and Ronaldo it would be great". 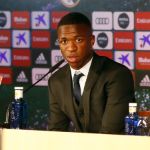