“He is one of the biggest prospects in Spanish and European football”, said Florentino Pérez.
Álvaro Odriozola was presented as a new Real Madrid player in the presidential box at the Santiago Bernabéu. The 22-year-old defender will strengthen the reigning European champions’ squad. The event, which took place in the presidential box at the Santiago Bernabéu, started with a video showing the player’s best moments. Then, Florentino Pérez took the floor to welcome the young full back: "We’re experiencing one of the best periods in our history and, for another season, we face the challenge of remaining loyal to our identity. We’re not going to rest in our search for success".

"Many considered it impossible to win three consecutive Champions Leagues and four in five years, and here they are. No club had won the basketball and football European titles in one season, and we did it. All this has been done thanks to the effort, talent and sacrifice, thanks to the sacred values ​​that have made Real Madrid one of the great references in the history of sports".

Strengthen the future
"We always want more. Each title is the first step in the search for new victories. That is why the future must be strengthened. We have a great team, a great squad that is going to be reinforced with great players. And that's why today we welcome a player who was wanted by a lot of big clubs, but he was clear where he wanted to play. At 22 years old he has been involved in a World Cup and has shown a great level that has brought him to defend the shirt and the badge of Real Madrid".

"Thanks for choosing us, Álvaro. You have chosen to come to the most demanding club and that shows your ambition and winning gene. You come from a big friend club, Real Sociedad, from which you have learned very important values ​​in your training. You are a full international, you made your debut only a year and a half ago, and you have become one of the big prospects in Spanish and European football. You come here to add your quality and personality to a team that will help you grow and win. And you have fans that will always be with you. In return, we are sure that you will give your best in each game. Today sees the beginning of your greatest dream and the biggest challenge of your career. Welcome and congratulations".

Odriozola: "It's a day I’ll never forget"
"It is an honour for me to be here today and fulfil the dream of every football player to sign for Real Madrid. I know the responsibility that comes with wearing this shirt and the only thing I can promise is that I will give everything, humility and sacrifice so that our future is successful. The last year and a half has been like a movie and I’m now fulfilling the dream of wearing the shirt of the biggest club in the world, that of Real Madrid. It’s a day I’ll never forget and I’ll not let this opportunity pass me by. Hala Madrid!".

Signing the contract
Before posing with the Real Madrid shirt (he will wear number 19) in the presidential box, Álvaro Odriozola signed his new contract in the Board Room of the stadium accompanied by Florentino Pérez. After the signing, the young Basque full back received a watch and a replica of the Santiago Bernabéu. 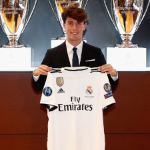