Madrid once again downed Baskonia in Game 4 at the Buesa Arena to claim a 3-1 series win. Rudy, who posted 27 points and a PIR of 33, was named as the final's MVP.
Fernando Buesa Arena

96
Real Madrid was crowned Endesa League champions for the 34th time in the club's history after downing Baskonia in Game 4 of the final at the Buesa Arena to clinch a 3-1 series triumph. The Whites once again evidenced their winning spirit, which is part of the club's DNA, to overcome the opposition and a record-breaking attendance, paced by MVP Rudy Fernández, who produced a decisive performance with 27 points, 17 of which came in the third quarter, and a PIR of 33. Campazzo (17 a nd 20) and Ayón (14 and 18), were outstanding performers. This success sees the trophy haul during Pablo Laso's tenure continue to grow and it's now 15 pieces of silverware in seven seasons. Real Madrid, meanwhile, adds to its legacy with a seventh league and European Cup double in the club's history in a stunning season in which the injury problems failed to stand in the way of the continent's most decorated basketball team.

Ahead of tip-off, this season had already seen Real Madrid contest the highest number of games in the club's history. Match-up number 83 followed a very different script to the three previous contests right from the off. Madrid was proving to be less prolific in an encounter in which with the physical stakes were very high - something the Whites didn't shy away from. It was Baskonia that appeared to take command, thanks to two straight treys from Janning (21-14, min. 7) against a Madrid side that looked more comfortable when near the basket, sinking 16 out of 18 points in the paint (six from Carroll), with the five turnovers preventing the team from ending the first quarter on top (21-18).

Defense & Rudy
Madrid upped the intensity levels at the back in the second stanza and controlled the rebounds under its basket. In offense, the team found the route to success on triples through the brilliant Rudy, who paced his side's fightback with 17 points and a PIR of 21 in the second stanza. This is the same amount of points that Baskonia made in all of the second quarter. A 15-2 run saw the Whites establish their biggest lead of the night as the went +6 up in the 15th minute. The guests held on to this lead until the break as Baskonia tried to counter Madrid's surge with a good spell from Granger (38-42, min. 20).

The contest became a spicy affair after the interview, but the Whites didn't get involved and kept cool heads in the face of the stifling pressure from the Buesa Arena stands and a consistent Baskonia side, for whom Huertas and Beaubois lead the charge (51-52, min. 25).

Mental strength
With the two teams trading blows, Real Madrid moved into the driving seat. Once again, the defense, featuring a quintent made up of Campazzo, Causeur, Rudy, Thompkins and Ayón produced an extremely solid showing in the closing minutes of the third quarter. The Argentine point guard enjoyed an excellent spell organising the defense, whilst Causeur and Ayón starred in the offensive stakes, whilst Rudy made his fifth triple of the night. All of this saw Madrid tear up a 13-2 run to head into the final stanza with a lead of +8 (57-65).

Madrid resists final onslaught
Rudy, with his sixth trey (27 points and a PIR of 33), and Ayón paced the Whites to a +11 at 64-75 in the 35th minute. This margin saw Madrid edge closer to the title as the minutes ticked by. However, the team was forced to dig deep. Beaubois starred in a 7-0 run in the space of barely two minutes to put Baskonia back in the hunt (73-77, min.37). This proved to be the ultimate test for the champions elect. With the momentum in the hosts' favour, Real Madrid showcased what has been its big secret this year: be a TEAM. With the scores at 78-81 with 2:40 remaining, Doncic posted a decisive trey on one leg just as the team had retained possession for 24 seconds. This was one final blow to Baskonia's spirits. Campazzo clinched the club's 34th title with a further two treys to make the final score 85-96. The Whites once again take the league in what's a fourth title success in the last six years. 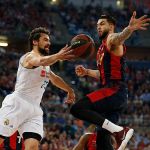