World champions for a sixth time

Real Madrid successfully defended their Club World Cup crown after overcoming Gremio in the tournament's showpiece in a 1-0 victory.

Real Madrid were once again crowned world champions, lifting the trophy for a sixth time in the club's history. On this occasion, Abu Dhabi was the setting as Zinedine Zidane's men wrote a new chapter in the Whites' legacy. This tournament saw the team claim the club's fifth title of 2017, which proved to be the most successful year in the club's history in terms of the number of trophies secured. Al Jazira (United Arab Emirates) and Gremio (Brazil) were Real Madrid's opponents en route to capturing a sixth world title.

The goals scored by an on-song Cristiano Ronaldo proved to be key in this success. The Portuguese attacker netted the equaliser in the semi-final and his free-kick in the showpiece turned out to be the winner. These strikes saw him further enhance his legacy and become the competition's all-time leading goalscorer. The Madrid forward was also named the Man of the Match in the final

In Madrid's tournament opener, Luka Modric provided the assist for Cristiano Ronaldo to make it 1-1 against Al Jazira, whilst immediately after entering the action, Gareth Bale scored the goal that clinched Madrid's place in the final. The Croatian served up a footballing masterclass at the Zayed Sports City Stadium in both of the games, with his performance against Al Jazira enough to earn him the Man of the Match award and his impressive displays landing him the Club World Ballon d'Or.

In the space of less than two years under Zidane's stewardship, the Real Madrid fans have savoured seeing their team capture no less than eight titles. The 2017 trophy haul features a LaLiga title, a Champions League crown, the Spanish and UEFA Super Cups and the Club World Cup, all of which made it an unforgettable year, as highlighted by Florentino Pérez: "We're enjoying some fantastic years. Everyone has recognised our achievements. As well as winning, it's comforting to know that we're worthy winners".

Celebrations
As well as lifting the trophy, Sergio Ramos also collected FIFA's Fair Play award in recognition of how Real Madrid promoted the values of fair play throughout the competition. To round off this historic night, the players revelled in the celebrations, firstly out on the pitch and then in the dressing room. 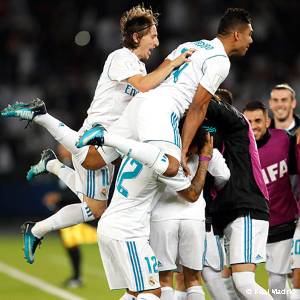 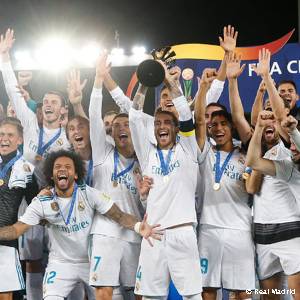