Borut Pahor was welcomed to the stadium by José Ángel Sánchez.
A delegation of Slovenian visitors, headed up by the country's president, Borut Pahor, visited Real Madrid City and the Santiago Bernabéu. The expedition were joined on their tour by Luka Doncic, who acted as a host for his compatriots. At Real Madrid City, the visitors were shown the basketball arena and the first-team and academy residences.

Next up, Pahor was taken to the Santiago Bernabéu, where he was welcomed by Real Madrid's general director, José Ángel Sánchez, who presented the president with a replica model of the stadium and a shirt with his name and the number one on the back. The Slovenian president also posed for a photo with the club's 12 European Cups and ended the tour by heading pitchside. 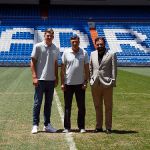