Nearly 500 people attended the event to mark the 39th anniversary of the madridista supporters' club.
Florentino Pérez has attended a tribute by La Saeta Supporters' Club dedicated to Paco Gento. More than five hundred people came together as the club celebrated their 39th anniversary in an event at the Eurostars Madrid Tower hotel. As well as the madridista president and honorary president, other figures also in attendance were Eduardo Fernández de Blas, second vice-president of Real Madrid; various Board members; Manuel Gómez, Supporters' Club director; and veteran players including Santamaría and Pachín.

As the dinner ended, and prior to the exchange of gifts, Florentino Pérez thanked the supporters for their unconditional support: “Many thanks to the president for inviting me to this anniversary. I want to congratulate all the supporters' clubs that have been a part of this tribute to Paco Gento, our club's honorary president. This supporters' club is named after Di Stéfano, who for every madridista, is the man who changed Real Madrid and footballing history".

"Gento is his worthy successor. There could have been nobody better to continue his legacy. I saw him play and he was an example in every sense. Alongside Alfredo and other veterans, he was part of creating a magical Madrid which won the hearts of fans. There is no place in the world without Real Madrid supporters”.

"Gento is a perfect honorary president for this club. It's impossible for anyone in the world to win 6 European Cups and 12 league titles. He was at Real Madrid for eight seasons, he played in 600 games and scored 182 goals: a simply unbeatable CV. He is an example for football, for Real Madrid, of our sentiments and the unity of madridismo. I'm very proud that our delegates have chosen him as the honorary president”.

The efforts of the supporters' clubs
“These clubs are the building blocks of Real Madrid. They work to defend the club's values, its unity, and ensuring that those sentiments are felt strongly in Spain and throughout the world. I'd like to show my appreciation for all the work La Saeta Supporters' Club has done over the years.

Gento: “It's a real pleasure”
“I want to say thank you to La Saeta Supporters' Club. I'm very proud to have recieved this tribute. It's a real pleasure to be here representing my friend, a real madridista and wonderful player who made Real Madrid great: Alfredo Di Stéfano. I have many memories of him. I think he'll be listening in on me and I'd like to send him a big hug from here today”. 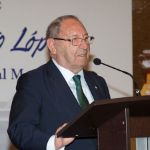