The event, which was held at the Puerta 57 restaurant, was also attended by Castilla player Achraf.
Florentino Pérez was in attendance at the Peña Casa Madridista of Morocco supporters' group's 3rd anniversary celebrations, which were held at the Puerta 57 restaurant. The Real Madrid president expressed his gratitude for the support that the team receives from the north African country and looked back on the affection shown by supporters during the Club World Cup, which the Whites won in 2014.

Also in attendance at the function, in which gifts were exchanged between the club and the supporters' group, were Real Madrid deputy vice-president, Eduardo Fernández de Blas and Castilla player, Achraf. Prior to the event, the members of the group enjoyed meeting Roberto Carlos in the presidential box at the Santiago Bernabéu. 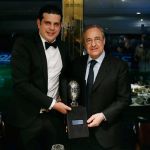