Two goals from Cristiano Ronaldo and one from Lucas Vázquez give the Whites the victory against Real Sociedad.
Santiago Bernabéu

1
Real Madrid ended 2015 with 3 more points in the league. A double from Cristiano Ronaldo who takes his total to 16 this campaign and a goal from Lucas Vázquez sealed victory against Real Sociedad. The goals didn't come early as Rulli soon began to shine as the visitors' best player, making three big saves inside the first 8 minutes to keep his team in it.

The first came with 5 minutes on the clock after a corner from James Rodriguez was headed goal bound by Pepe. The next two came in the same minute with a fine counter-attack which started in the Real Madrid area and ended with a left footed shot from Cristiano Ronaldo after 8 minutes, the effort was blocked by the keeper on this occasion. In the next move, a cross from Marcelo was partially headed clear by a Real Sociedad defender but Karim Benzema was alert in the area and vollyed on target only to be denied by the away team's keeper.

The Whites continued to attack and in the 23rd minute they had the best chance so far. Gareth Bale crossed from the left and Karim Benzema went down in the area. Cristiano Ronaldo stepped up to take the penalty but the spot kick went over the visitors' goal. The teams weren't going to go in to the break all even. Bale again involved, his ball in to the area was handled by Yuri Berchiche and on this occasion the Portuguese forward made no mistake to register his 15th goal of the season and put the Whites in front.

Ronaldo double
The side didn't get off to a great start in the second half with Bruma leveling things up after 48 minutes finishing well from just inside the area. This didn't affect the Whites having 40 minutes to get back in front. They didn't need so long when in the 67th minute Marcelo whipped in a corner that Cristiano Ronaldo hit first time with his left foot, firing past Rulli and in to the bottom corner.

Just three minutes later there could have been a third but Rulli again reacted well to keep out Karim Benzema who shot from around the penalty spot. The third came in the 86th minute after a great counter-attack. It began with Cristiano Ronaldo getting away from two players before setting free Gareth Bale whose cross was met by Lucas Vázquez who finished well after replacing Benzema in the 76th minute. The first official goal in the first team for the academy product and Real Madrid signed off in 2015 with 3 more points in the league. 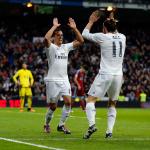