Raúl: adiós to a legend

He has hung up his boots 21 years after his first appearance for Real Madrid.

On 29 October 1994, Raúl made his first-team debut for Real Madrid against Real Zaragoza at La Romareda. The appearance signalled the beginning of a glittering career that has seen the player go down as one of the greatest in the history of football. In playing days spanning just over two decades, the forward amassed trophies with every club he featured for, and established himself as a Real Madrid legend.

Florentino Pérez: "Raúl, a legend in Real Madrid's legend"
On 16 November 2015, Raúl played his last game as a professional footballer. He did so wearing the shirt of the New York Cosmos, as his side defeated Ottawa Fury in the final of the North American Soccer League (NASL). Following his retirement from the game, Real Madrid president Florentino Pérez paid a written tribute to the player, in which he highlighted the significance of Raúl's impact and all that he represents.

Raúl's figures with Real Madrid are impressive. He scored 323 goals, played in 741 matches - the club's all-time appearance record - and in 16 seasons at the Bernabéu lifted 16 trophies: three Champions Leagues, two Intercontinental Cups, one European Super Cup, six La Liga titles and four Spanish Super Cups. He also left behind memories that will live on forever in the hearts of the fans, such as his goals in the finals that saw Real Madrid win their eighth and ninth European Cups, as well as the strike that delivered the Whites' second ever intercontinental crown.

After the conclusion of his glorious time at Real Madrid, Raúl continued to set the benchmark at every club he went on to play for. First he moved to German outfit Schalke 04, before turning out for Al-Sadd in Qatar and finally the New York Cosmos.

Admired
During his 21-year professional career, he earned the respect and admiration of the football world. The affection in which he is held by those he has worked with was clear to see in the days ahead of his final appearance, a prime example of this being the messages of support he received from Rafa Benítez, Cristiano Ronaldo, Álvaro Arbeloa, Marcelo and Pepe before calling time on his career - a legendary career. 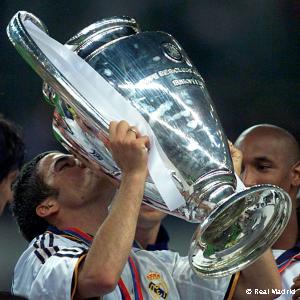