A large banner of the former Whites' player, who passed away on Monday, was unfurled in the Calderón.
During the build-up to the derby clash against Atlético, the Real Madrid fans in attendance in the Vicente Calderón paid tribute to Ignacio Zoco, who passed away on Monday. The Whites' supporters unfurled a large banner bearing an image of the Real Madrid legend, which read: "Maximum rivalry, never violent. We follow your example". 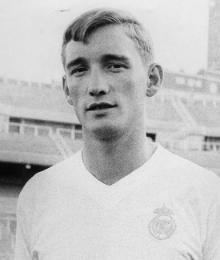