More than 200 Real Madrid fans enjoyed the event ahead of the match at the Sánchez Pizjuán.
The support of the Real Madrid faithful will be fundamental during the season run-in. Hours before the match at the Sánchez Pizjuán, the Meliá Sevilla hotel was the venue for a meeting of more than 200 Whites fan club members. The president, Florentino Pérez, was in attendance at the event and posed for photographs with the fans, who offered him numerous shows of support and affection. Also present were Eduardo Fernández de Blas, second vice president; Emilio Butragueño, director of institutional relations; José Luis Sánchez, social area director; and fan clubs director Manuel Gómez.

Following a projection of the La Décima anthem, Fernández de Blas was handed the floor: "Every time we come to Seville, it's an honour to be able to see the manner in which an emotion is experienced that binds us all together: our support for Real Madrid. As members and fan club members, you are fundamental and provide the backbone for the unity of Madridistas. Unity is essential for the present and future and it's what makes us strong. Because of this unity, our club is experiencing the greatest stability of recent times".

"La Décima is in the memories and the hearts of Madridistas across the whole world. Ramos' header reflects the character and the identity of the club. We're in the semi-finals of the Champions League for the fifth consecutive year. And, in basketball, we're in the Final Four for the third year in a row. Thanks to your loyalty, affection and support". 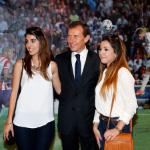